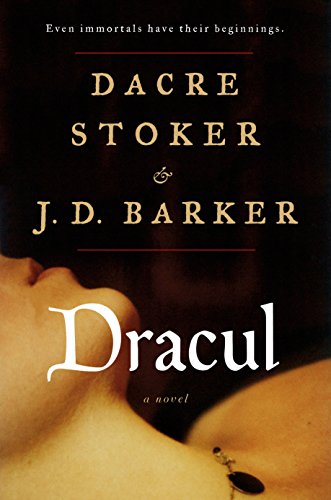 Until the age of seven, young Bram Stoker has suffered from an undiagnosed ailment, making him an invalid barely able to leave his bed. Though his family thinks his physician uncle healed him with leeches and bleedings, Bram and his sister Mathilda know it is really their nanny, Ellen, who brought about the miracle. Bram is now a normal child but he’s left with the belief he was meant to die and his beloved caregiver fought death for him and won.

Ellen herself is something of a mystery.

Ellen Crone appeared out of nowhere, occasionally disappearing with no warning, but she becomes so indispensible to the Stoker household, everyone accepts her vagaries without complaint. Shortly after Bram’s recovery, however, Ellen disappears for good.

“I closed my eyes and thought about Nanna Ellen. I didn’t feel the cord as I had on the previous night, nor did I feel the tug that came with it. I felt abandoned at this thought. She had abandoned my family but somehow I had assumed she had not abandoned me. She was not there. I felt nothing.”

Many years later, when the Stoker children are in young adulthood, Mathilda returns from an art tour of Paris, telling Bram she’s seen a woman she’s certain is Ellen. This woman, however, looks as young as the nanny did when she lived with them those many years ago.

Bram is intrigued as well as filled with a desire to see Ellen Crone again.

“If you somehow saw Ellen, if there is a chance we can find her and ask her how she healed me, ask her what she did to me, I need to . . . I want to understand.”

Thus begins a quest for the truth—about Ellen Crone, unexplained deaths occurring during the Stoker children’s childhood, the discovery of a box of dirt under Ellen’s bed, and some very odd recent events, among them, a jar containing a heart that suddenly begins to beat. There is also a glimpse of a man in a black cape whose fang-filled smile means death, a journal written in Ellen’s hand but dated “1694,” and a ring with the inscription casa lui Dracul.

Soon, Bram and Matilda will find themselves on a journey of frantic discovery, accompanied by their physician brother, Thornley, who joins them only after his interest costs him great personal tragedy. Their quest will end in the heart of middle Europe, in a land Bram revisits only in his writing, where he will once more come face-to-face with the missing nursemaid and learn the truth of what happened the night he was “cured.”

“‘My blood flows in your veins, but you are not undead. You are still human, something special.’”

He will also meet the man in the black cape, who leaves him with a threat and a promise:  “Her blood granted you a life that was not meant to be. Borrowed time must be repaid.”

Though his adventure gives him the story that will make him famous, Bram realizes he must do his utmost to make certain repayment is never made.

In this prequel authorized by the Stoker estate, the horror novel purist or Dracula aficionado may take exception to the title, since “Dracul” is the name history gave to Dracula’s father and is not his surname.

After this fine point is overcome, however, the reader will readily admit that Dacre Stoker and J. D. Barker have devised a story much more satisfying and definitely more chilling than the sequel to Dracula written by Mr. Stoker in 2010, i.e., Dracula The Un-Dead.

Those familiar with Bram Stoker’s Dracula will find many similarities in this narrative that point up and echo situations in that novel. The authors of Dracul have used the same literary form as in Dracula, the epistolary format, comprised of diary entries, letters, and narratives written respectively by Bram, Matilda, and Thornley. This method better fits the story than a straightforward approach, as it presents the events from differing viewpoints. Interspersing Bram Stoker’s life, from his illness-ridden childhood through young adulthood, with scenes from the present, makes this story a family affair as Bram, his sister and brother, take on the Undead.

After enjoying this imaginative prelude to the novel that has become one of the most famous horror stories ever written, the reader can learn more about Bram Stoker from the Author’s Notes. These include facsimiles of the actual manuscript, with handwritten edits and notations as well as quotes from Stoker’s own correspondence, and brief biographies of family members

This story is a perfect prequel to Dracula and should respectfully take its place beside that volume on the bookcase shelf.