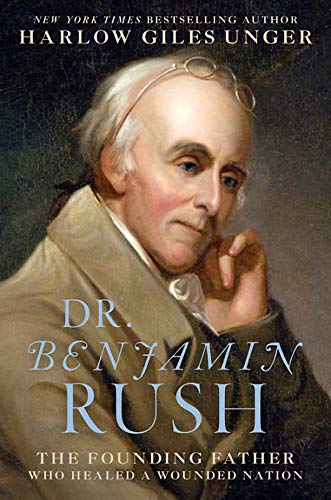 Some of the names of the 56 signers—our Founding Fathers—of the Declaration of Independence are well known. Names such as John Hancock, Benjamin Franklin, Thomas Jefferson, and John Adams have become iconic in the history of this country as much for their signing the document as their other public duties and contributions during their lifetimes.

Yet many would be hard pressed to name other signers who, not nearly quite so prominent, pledged their “lives, fortunes and sacred honor” in the name of our independence while at the same time signed their own death warrants should they be captured, surrender, or otherwise brought to justice for treason against the British Crown.

In the case of Dr. Benjamin Rush, not only was he a signer but, probably unknown to most, also a physician and scientific observer, humanitarian, social reformer, and, one could even say, a philanthropist, given his unpaid efforts at many levels to improve life, health, and his country’s society in general. Indeed, some of his sons continued in his footsteps over the course of their lives.

This publication details many of the contributions made by Rush during his life in fields that range from human medicine and disease, veterinary medicine, psychiatry, and geriatrics to prison reform, temperance, and humane treatment for the mentally ill. Further, he was also a veteran of the Continental Army and a political leader in Pennsylvania with all that that entails in terms of partisanship following the establishment of political parties in the Republic’s early years.

His personal efforts even extended to being instrumental, just prior to his death, in facilitating the resumption of relations and the ensuing correspondence between one-time bitter political enemies, and former presidents, Thomas Jefferson and John Adams.

Although many of his treatments and cures for human disease were faulty or incorrect, in at least some instances he was on the right trail. One in particular was the necessity of cleanliness, hygiene, and sanitation. In a time when sewage systems were lacking, most wastes were poured out on the street or otherwise left to rot or decompose. Rush encouraged the disposal of garbage and trash.

In the case of yellow fever, he divined that much of its cause was due to foul or stagnant standing water, little realizing then that these were prime breeding grounds for the real cause of the disease: mosquitoes. Unfortunately, he also believed that bleeding and purging were effective treatments when the former can easily lead to shock and systemic organ failure if one is bled too much and/or too often.

Rush was among the first to encourage proper and humane treatment for the incarcerated and mentally ill. Teaching a trade and rehabilitation efforts for criminals went above simply the standard punishment routine for breaking the law. For the insane, it was elimination of physical and sexual abuse, better food and housing for those he believed, rightly, had brains which were affected by disease, damage, or trauma and not as being possessed or willfully antisocial.

Benjamin Rush wore many titles as referenced above: Father of Psychiatry, geriatrics and veterinary medicine in addition to his contributions to medicine and disease pathology. He was also a family man although his exertions kept him from domestic duties for long periods of time with the exception of fathering 13 children with his long-suffering wife, Julia, four of whom died within weeks or months of birth and the oldest son who eventually went insane.

Among the highlights of this publication are the many portraits, illustrations, and engravings pertinent to the story that are interspersed throughout the text. The bibliography includes many primary sources such as contemporary letters, archival materials, manuscripts, and newspaper articles along with more recent scholarship of the last hundred years.

The first three of four appendices list selected titles of writings by Rush by topic, medical inquiries and observations and literary, moral and philosophical essays, respectively. The forth is a document written by Thomas Jefferson to Rush regarding his views on the doctrines of Jesus Christ as compared with those of others.

In an age of towering literary, political and military giants such as Jefferson, Franklin, Adams, Washington, and others, it is indeed surprising that Rush should be as little remembered as he is by most Americans. Perhaps this biography can right this and return him to the pantheon of our greatest Founding Fathers.