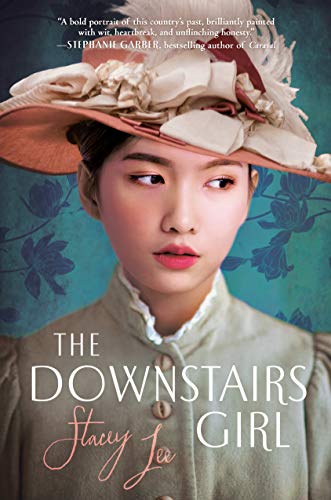 “Lee writes with stunning clarity and expert plotting. Her poetic prose shimmers in the light she throws upon the social injustices of the time . . .”

Stacey Lee’s The Downstairs Girl is enjoyable and memorable. Published as a young adult story, it has received multiple starred reviews and will please adult readers of literary fiction as well.

On the day when 17-year-old Jo Kuan, assistant to a milliner, decides to ask her boss for a raise, she’s fired. Despite the fact that Jo works faster and better than the other assistant. Despite the fact that Jo’s hats with her special decorative silk knots are highly admired and far more glamorous than the other assistants’ hats. “You make some of the ladies uncomfortable,” Jo’s boss tells her. Because Jo is Chinese American in post-Civil War Atlanta in 1890. And because outspoken Jo is a “saucebox” and can’t keep her opinions to herself.

But she soon discovers that being a saucebox can be a good thing. Jo and her guardian, Old Gin, secretly live in the basement beneath Mr. Bell’s house, once owned by an abolitionist. The basement was a former underground railroad stop; it has two hidden entrances, room enough for Jo and Old Gin to be comfortable, and a disguised speaking tube that connects their rooms to Mr. Bell’s print shop directly above them.

Jo has been listening to Mr. Bell and his family through the speaking tube all her life. She hears one night that his newspaper, The Focus, is failing because a competing newspaper has an advice columnist named Aunt Edna. Mr. Bell wishes he had one, too. Jo anonymously slips a note through the mail slot of Mr. Bell’s house offering her services as an “agony aunt,” calling herself Miss Sweetie. As Miss Sweetie, Jo voices her true feelings in the cleverly written and controversial columns that focus on many of the time’s problems: prejudice against blacks and Chinese, and the stringent control men have over everything women do. Jo doesn’t believe for an instant that women and blacks and Chinese can’t do pretty much everything that white men can do.

But Miss Sweetie doesn’t get paid for her columns, and Jo must make money so she and Old Gin can live. She reluctantly takes a job with her former employer, wealthy Mrs. Payne, as lady’s maid to her disagreeable daughter Caroline. Old Gin works in the Payne stables. When Jo was very young she lived with the Paynes and played with Caroline until Mrs. Payne told her she could no longer live or work there. Caroline is now a young lady, while her older brother is away at college. Caroline’s temperament has not improved: She is cruel and frequently makes racist comments about Jo and her black servants. In the meantime, subscriptions to Mr. Bell’s newspaper have steadily increased.

Lee writes with stunning clarity and expert plotting. Her poetic prose shimmers in the light she throws upon the social injustices of the time (some of which sadly persist into the present) while she also deftly leads readers through the mysteries Jo must solve. Who exactly is Old Gin? Where are Jo’s parents and why isn’t she with them? Will the Bells discover that Jo and Old Gin live in the dark basement beneath their house and evict them? And will people learn she is Miss Sweetie? She even wonders if Old Gin and she could end up in jail. The final pages reveal the answers to these questions in a most satisfying way.

This is a charming, delightful, and thoughtful story about a place and time unknown to many people, featuring historical events such as racism, segregation, and the beginnings of the suffragist movement in the Reconstruction-era south. But most of all, it’s the story of an admirable and unforgettable heroine determined to find truth and equality for herself and those she loves.