Down the Darkest Road 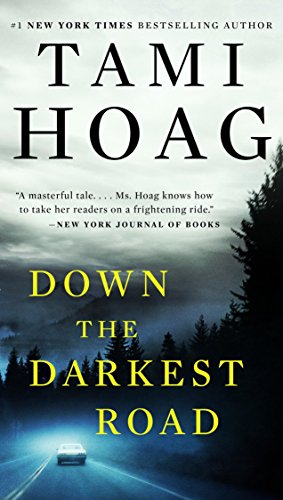 Like a weaver of a tapestry, Tami Hoag attempts to tie her characters into a tight frame of mystery, psychological depravity, and murder.

Instead, she takes them through a multitude of shades and hues in an emotional mess of tangled threads. There is such a dismal failure to elicit sympathy for her main characters that one cannot imagine this book making the New York Times bestseller list, much less selling out its print run.

It is unfortunate that Ms. Hoag cannot seem to find vocabulary beyond the F-word to express anger and frustration. Such an embarrassment detracts. At times, the emotional swing of Lauren Lawton, the main character, nearly drowns the reader in boredom. The details fail to move us. The effort to convey the psychological impact of tragedy so dominates the scenes that one loses the sense of the thriller—of the desire to catch the murderer.

The author also fails to build the story line sufficiently to cause the reader to anticipate the next chapter. Rather than introducing subtleties of plot, the emotional shift from mother to daughter doesn’t pique the reader’s curiosity to speculate if the two of them can ever accept one another. Over 100 pages were required before the antagonist became a character rather than just someone in the past of Lauren Lawton. It took another 50 pages to stimulate a potential confrontation with her nemesis. Halfway through this 415-page book, one gets a feeling of involvement—that fails to build.

The strain presented between Lauren and Leah—the daughter who is into cutting—seems to be so much on the surface: lint from the tapestry that is never quite woven into sympathy for either woman. The ending begs for an emotional purging. It just doesn’t happen. And the last two chapters? Wasted afterthought.