Down a Dark River (An Inspector Corravan Mystery) 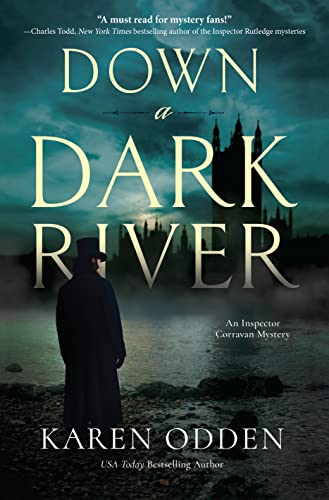 “Odden’s character development is strong, her narration is vivid and places the reader in the right place at the right time, and her locations are descriptive pictures of London in the Victorian era.”

For the reader that likes to mix history with mystery, Karen Odden’s current novel Down a Dark River: An Inspector Corravan Mystery is just the ticket.

Set in Victorian London in the spring of 1878, the story opens with Scotland Yard Inspector Michael Corravan being assigned to find a woman who disappeared from her home two weeks earlier. And as he sets out on the task, his director, Howard Vincent, approaches him with a new assignment and he is to set that already late case aside because a young woman has been found dead floating in a boat on the Thames.

Vincent is “A stickler for keeping proper records in case anyone from the Parliamentary Review Commission wanted to see them at a moment’s notice.” Corravan is annoyed at the interruption, but he knows that the Yard is just coming out of a humiliating and degrading situation that has left the citizens of London in disbelief and distrust of the authorities, and the Parliamentary Review Commission wants nothing more than to disband the Yard.

As if this new assignment weren’t enough to get his hackles up, Corravan is told that when he arrives, he is to report to Superintendent Blair, his previous boss. Blair and Corravan have been at odds since Corravan left the River Police to join the Yard and this does not bode well for a quick resolution to the current problem.

And here is where Odden begins to weave her story together with three characters who are all at odds with one another. Inspector Corravan prefers to take orders from himself rather than his boss; Director Vincent is new to the job of running this division of the Yard, and he has no police experience; and Superintendent Blair wants no interference from Scotland Yard and especially none from Michael Corravan. And the stage is set.

Not one to shirk his duties, Corravan takes on the new assignment but does not discard the search for the lost woman, Madeline Beckford. Corravan and his partner, Inspector Stiles, begin a double investigation of two situations that do not relate. Or do they?

It does not take long for Corravan to discover Madeline in an asylum—dirty and mute. Is she unable to speak or just won’t speak? As it was in London at this time, women were the property of their fathers first and then their husbands, and when Corravan attempts to bring her home, he discovers there is more to her escape than her husband is willing to admit to. Corravan takes her to a hospital run by his friend, Dr. James Everett, for her protection.

With Madeline tucked safely away until she recovers and can explain her aversion to returning to her home, Corravan and Stiles continue their investigation on the woman in the boat. It’s a slow investigation but they discover her identity and learn she came from a wealthy and well-known family.

Here Odden takes a turn when she places a second dead body in a boat on the Thames just one week later. Convinced there is some connection between the two, Corravan fails to discover what that connection is, just that this young woman also came from a well-to-do family. When a third attack is discovered, this time with the woman surviving, there is hope that the name of the perpetrator will come to light.

Odden is not leaving the Beckford situation untouched. She provides Corravan with another problem. His pseudo-mother, Ma Doyle, has asked him to take on Harry, a young man who has little direction in his life. He is bright, reads a great deal, and speaks French, a language that Madeline has been speaking while recovering, and he wants to be a doctor. Odden creates this interesting character to provide a connection with Madeline. This perfect match for James Everett and Corravan brings the two together.

This is a brilliant introduction to the two situations that Corravan is investigating, and the story, already fast paced, begins to move with even more speed.

Odden begins to pull together the relationships between Madeline Beckford and the three women on the Thames. The connection that she has designed takes a surprising turn as the story winds down, but it makes such sense that the reader will wonder why they didn’t see it earlier.

It should also be noted that Odden’s character development of Michael Corravan is especially good. And it takes his female friend, Belinda, to point out to him that he cannot save the world by himself, as much as he tries.

As with all good mysteries, Down a Dark River has its climactic ending.

Odden’s character development is strong, her narration is vivid and places the reader in the right place at the right time, and her locations are descriptive pictures of London in the Victorian era. She has created a page-turner that is definitely hard to put down.