Down a Dark Road (Kate Burkholder) 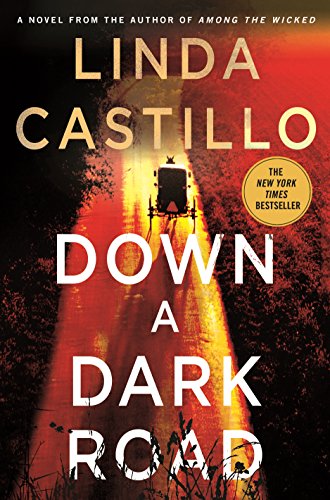 The world is complex and riddled with violence, and no one knows that better than Kate Burkholder. Born and raised in the Amish faith, she left the community to be the police chief for the small town of Painter's Mill, Ohio.

Her upbringing is still instilled in her, and when her childhood friend Joseph King is convicted of killing his wife, Naomi, Kate is astounded and disbelieving.

While a teenager, Joseph lost his way after the accidental death of his father. Caught up in drugs and alcohol, he developed a violent temper. It took meeting Naomi, getting married, and becoming a father to five children for him to change. All the evidence points to Joseph for Naomi's murder, and though he vehemently denies committing the crime, he is incarcerated for life.

Kate idolized Joseph as a young girl, especially when he saved her from a raging flood after she went out to rescue her beloved cow and calf. She cannot help but remember the boy she had feelings for and finds it difficult to believe he would brutally kill Naomi, even with every indication he did.

Kate learns Joseph broke out of prison and there is a manhunt for him. Working on instinct, Kate goes to Joseph's sister-in-law's home where his children now reside, believing he may have gone there. Unaware he is nearby, she finds herself pulled into the house as a hostage; he pleads with her to find the real murderer. His youngest daughter tells Kate about a strange man in the house the night of her mother's death, though no one would listen to the claims of a toddler at the time of the trial. Kate is torn between knowing the Amish are non-violent along with her old feelings for him. Now loyal to her job, she tries to convince him to surrender to the authorities.

"I stare at him, feeling watched and exposed, standing in the doorway, his face a scant foot away from mine. I want to think it's because an army of my counterparts with binoculars and night vision are camped out a hundred yards away. Or maybe it's the thought of a sniper with Joseph in the crosshairs. But neither of those things are the reason why my heart is pounding. Or why I suddenly can't seem to get enough oxygen into my lungs.

"'We never talked about the way things were between us,'" he tells me.

"As I stand there, looking into a face I once knew so well, I'm shocked to realize some small part of me still remembers that knockout punch of my first crush . . .

. . . "A sudden grin and he braces a hand against the jamb behind me. I know in an instant before he leans close that he's going to try to kiss me. A farewell kiss? Or something more final? Whatever the case, it's inappropriate. "

A reporter surreptitiously snaps a photo of Kate and Joseph by the door, and though he does not kiss her, she is removed from duty because this hits the front page of the paper and is interpreted unjustly.

Not to be dissuaded, Kate proceeds with an investigation herself. She contacts several individuals—both Amish and law enforcement—to gain insight into the possibility of Joseph's innocence. Little does she know she's putting herself in great danger.

Kate, who narrates her tale in the first person is tied to her roots while somehow needing to prove Joseph is not a killer. Fast-paced and filled with tension, Down a Dark Road delves into Amish teachings and tradition and how they deal with the "English" world and its legal system.

The back story is interplayed revealing Kate's formative years and her life as it is now outside the Amish populace. Her history, as well as her current life and experiences make her better able to understand the differences between both sides of the equation, yet her main concern is finding and exposing the truth.

Down a Dark Road is the ninth addition to the Kate Burkholder series. It is well-written and fleshed out to stand alone; however, the plot, locale, and characters warrant reading the previous novels.