Down on Cyprus Avenue 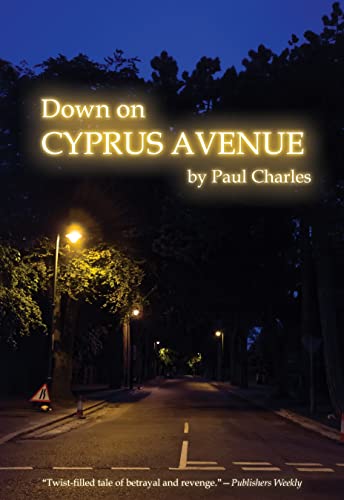 Irish author Paul Charles has created an endearing character in his new novel, Down on Cyprus Avenue.

Brendy McCusker is a retired detective who thought he was about to live the good life. Having spent his career solving crimes, he readily accepts a generous early retirement from the Ulster Police Department. As he is about to enjoy retirement, his wife, whom he admits he never loved, absconds with his money and runs off to America. With his wife and nest egg gone and no paycheck coming in, McCusker is forced to return to work.

Seemingly simple on the surface, McCusker is nothing if not a deep thinker. He loves police work, particularly solving crimes. Reporting to work post retirement, he is partnered with Detective Inspector (DI) Lily O’Carroll. Immediately the two are assigned to a kidnapping involving the two sons of a wealthy businessman. While the new detective team is just beginning to learn how each other works and discovering each other’s idiosyncrasies, McCusker is pulled off the case. A brutal murder involving an American banker becomes McCusker’s sole responsibility.

Eventually, DI O’Carroll solves the kidnapping case and rescues the two men held who were held hostage. In the heat of paying the ransom, however, the kidnapper somehow escapes the carefully orchestrated drop, raising more questions than answers.

Afterward, O’Carroll is once again partnered with McCusker to work on the homicide of the banker. The two sleuths find the case is not as straightforward as it first appears. Also, the victim’s family supplies somewhat confusing answers. As time wears on, McCusker and O’Carroll realize the kidnapping and homicide are somehow connected. They begin to focus more intently on the kidnap victims and family.

As the story moves forward, an interesting chemistry develops between the two detectives. Not so much in a romantic sense, but clearly the two have feelings that go beyond being detectives. Their snappy repartee and jokes will amuse and entertain the reader. And while McCusker is intent on doing his job, he is also a bit distracted by juggling his move to Belfast and his attraction to beautiful Irish women.

Lily O’Carroll is determined to set McCusker up on a blind date with her sister. He’s somewhat reluctant, but agrees to the date. His preparations for the meeting are extensive and his trepidations many—it’s been 25 years since he’s dated. Alas, at the appointed place and time, McCusker is stood up. All he can do now is dream about what might have been.

The author has not only created a wonderful character in McCusker, but also a top-notch story. Down on Cyprus Street has plot twists and turns that make it a heckuva good read. Just when the reader, along with the detectives, believe the right person is in custody, a new set of clues emerge pointing to someone else. Good writing.

McCusker truly carries this mystery. He is a street cop doing what he loves to do, and it shows. At the end of the book, even his partner praises him. “In the short time I’ve known him,” Lily O’Carroll says, “I’ve come to realize he’s more preoccupied in protecting the innocent than he is in punishing the guilty.” Readers will surely want more of this interesting detective.