Down in the Chapel: Religious Life in an American Prison 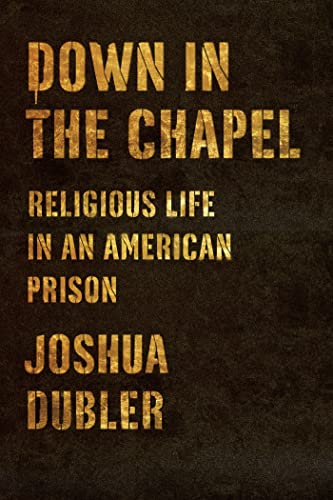 “What Dubler has produced in his weeklong observance of activities is a rare combination of prison anthropology, deep journalism, history of religiosity in the United States, and a personal self-critique of his own upbringing.”

Graterford maximum security prison is “thirty snaking miles northwest of Philadelphia's city line.” During one week in 2007 Joshua Dubler, an anthropology professor from Princeton, observed the various religious groups in the Graterford Chapel. Down in the Chapel: Religious Life in an American Prison is the fruit of that labor, an epic undertaking that investigates the minutiae of religious practice in the harshest setting imaginable.

Dubler's anthropological focus is “religious studies,” a classification that confuses and angers some of his interlocutors. (For reasons all too obvious, Dubler avoids using the loaded term “informant.”)

In his book he asserts that the Graterford prison chapel is “(as I hyperbolically italicized it in a preliminary report to my Princeton advisors: arguably the most religiously eclectic sliver of real estate in the history of the world.”

Taking a step back from the hyperbole, a look at the weekly chapel schedule reveals services for various sects and denominations of Christian worship (Blues Bible study, Yokefellows Bible study, St. Dismas Episcopal, Jehovah's Witnesses, Liberty Ministry Study, Catholic devotions, and more). There are also variants of Islamic worship (Talim (Muslim study), Moorish Science Temple, Muslim Jum'ah, and Muhammad's Temple (a Nation of Islam off-shoot)). Also included is a Jewish Sabbath and a Native American service. It should also be noted that among the “men of Graterford's Chapel” is Vic, the token atheist. (Note: Vic is not his real name. Dubler has changed the names of his interlocutors, as is common in anthropological practice.)

What Dubler has produced in his weeklong observance of activities is a rare combination of prison anthropology, deep journalism, history of religiosity in the United States, and a personal self-critique of his own upbringing.

Raised an agnostic practicing Jew, at present he classifies himself as a secular, observant to the point of going to Temple three times a year. Interspersed among the weekly activities and history of religious practice within the United States, Dubler sets forth ten theses to aid in explanation of the chapel ecumenical power.

An act called “The Raid” cuts through the timeline of religious practice at Graterford. In late October 1995, the same year Republican hardliner Tom Ridge became Pennsylvania's governor, there was a police raid on Graterford. It was a crackdown on allegedly illegal activities by the prison's Islamic community. These activities included drug dealing, prostitution, and fund-raising for terrorist groups.

“Nine employees were fired on the spot, and twenty-one prisoners, most of them community leaders and power players, were transferred, some across the state, and some, through a measure allowing states to trade their most dangerous, across the country.”

Prior to The Raid, the Muslim prisoners had their own masjid in the basement and appointed their own imam. After The Raid, the prison appointed the imam. This, coupled with 1993's Religious Freedom Restoration Act have inexorably altered how religion is practiced within the prison. The history of The Raid dovetails into a history of The Nation of Islam and The Moorish Science Temple, two religious sects created by African-Americans in reaction to The Great Migration in attempt at individual and collective racial self-determination. This is relevant because of Graterford's overwhelming African-American population.

Dubler rides the fine line between being a passive observer and active participant. Many times during the week he engages in lively discussions with the inmates. He remains surprised at the conservative and anti-evolutionist opinions espoused by the prison population's vast majority. It is another irony, since those outside the walls espousing these same political beliefs have campaigned for harsher and harsher penalties. In another historical aside, a history of Pennsylvania's penitentiaries shows the slow devolution in practice from that of rehabilitation to that of warehousing prisoners.

Throughout the narrative, Dubler follows the lives of four inmates, Baraka, Ed, Teddy, and Sayyid. Two are Christian, two are Muslim. Before the week is out, Sayyid disappears, sent to the hole for an infraction. While the anthropologist attempts to glean more information on Sayyid's disappearance and the nature of the charges against him, he comes to the realization that prison enforcement requires no such explanation. Even victims of assault get sent to the hole, while both parties are investigated. It is a harsh and capricious regime. Within the brutal confines of the prison, the chapel is seen as a respite and a means to find community.

During his observation of religious practice, Dubler set out to counter two stereotypes espoused by those outside: the poor man and the bad man stereotype. The stereotypes assume that because the men come from poor backgrounds, religion is the only thing they can afford. Or that they are bad men and their attempts at a moral and ethical life through religion is one of bad faith. Both stereotypes are shattered, because this retelling of a week's religious activities reveals the prisoners as something more than just social types.

Down in the Chapel highlights the humanity of the prisoners with a close eye for detail. It does for prison anthropology what Honoré de Balzac and Émile Zola did in their pursuit to investigate the various social strata of 19th century France. The book would make an excellent companion piece to Ivan Goldman's muckraking Sick Justice: Inside the American Gulag.

Dubler is not a muckraker, but he lets the prisoners speak and act on their own behalf, revealing the inequity, brutality, and failure of the American justice system in the present age of mass incarceration.