Down Along with That Devil's Bones: A Reckoning with Monuments, Memory, and the Legacy of White Supremacy 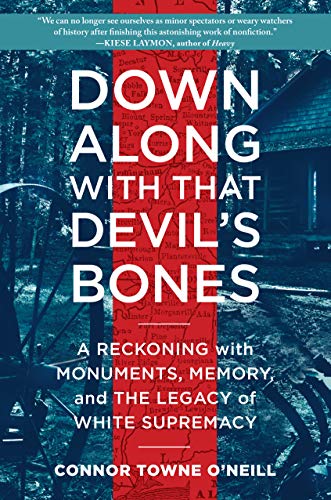 “O’Neill’s first book is a dazzling reminder that American racism is robust and virulent.”

Periodically, America turns its attention to its appalling past when four million men, women, and children were enslaved in this country. It is hard to believe that a country “conceived in liberty” treated other human beings as chattel. We know the commercial reasons why Blacks were slaves, primarily, but not exclusively, in the South. It made economic sense to purchase labor to work the cotton and tobacco fields—work the slaves did until they died. We know how slave owners justified slavery by characterizing Blacks as subhuman. Slaves were threatening to whites unless they were totally subjugated. Slave owners even used Bible verses to support this vile servitude.

America is currently in one of those periods of self-reflection, spurred on by the weekly deaths of persons of color at the hands of the police. Americans have taken to the streets to protest what has happened again and again throughout American history. This time is different, however. The protesters are both Black and white. Empowered by the belief that the current American president shares their racial prejudices, those armed groups who counter-protest have been open and obvious about their odious views.

Connor Towne O’Neill, a Pennsylvania native author and journalist who teaches at Auburn University in Alabama, set out to understand American racism by visiting monuments of Nathan Bedford Forrest, a Confederate general who represented all that was evil about the South. To add insult to the injuries and fatalities he caused, Forrest was a prosperous slave trader before the Civil War and the first Grand Wizard of the Klu Klux Klan after the hostilities ended.

In each of the places O’Neill visited a controversy had arisen about whether the malevolent statue of Forrest should be removed. O’Neill reports the words of proponents of the monuments without criticism. Forrest, they say, was a great general, and his statues are part of the heritage of the South. Opponents also have their say, although they do not always prevail in removing these symbolic stains on the public square.

O’Neill starts his tour of Forrest monuments in Selma, Alabama, very much in the news recently as a result of the passing of John Lewis. The police in Selma a half century ago were the instruments of white supremacy, but the racism has not waned over time. Those who see in the image of Forrest a glimpse of their own dominant heritage will fight with virulence against those who seek to make change.

Even the academy is not free of the scourge of racism. Middle Tennessee State University in Murfreesboro could not erase Forrest’s name from a building on campus because the state agency that controlled public universities resisted the pleas of both students and administrators. Forrest had become part of the official orthodoxy.

Ultimately, visits to monuments in Nashville and Memphis end O’Neill’s journey. Despite occasional victories, the stories he tells reveal the inbred evilness of the dominant forces in society, at least in the South where, based on O’Neill’s interviews, the Civil War has never ended.

O’Neill’s first book is a dazzling reminder that American racism is robust and virulent. He writes with a fluency of American culture that portends well for his books to come.