The Dove's Necklace: A Novel 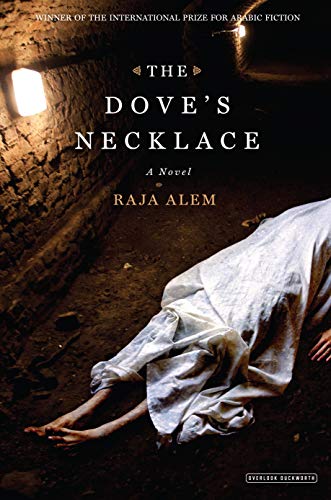 “The only thing you can know for certain in this entire book is where the body was found” speaks the Lane of Many Heads in the opening sentence of Raja Alem’s novel, The Dove’s Necklace. A naked corpse is found in “the cleft between two houses,” and this is perhaps the only moment of true clarity the reader will have for the next 480 pages.

What follows seems like a complete bungling of all rules of crime scene investigation and police procedural. The officer first on the scene doesn’t bother taking the fingerprints of the corpse, just strolls around the body “laughing flirtatiously with the feminine voice emanation from the cell phone that never left his ear.” When the onlookers begin to question his nonchalance he threatens that anyone with information about the identity of the victim might find themselves tangled up with the authorities for up to a year.

The detective assigned to the case, Nasser, someone so keen he could “sniff out a drop of sweat on a corpse” and is likened to “the archangel who will sound the trumpet on Judgment Day,” does not go house to house to seek the identity of the victim but waits in his office, “each day brought dozens of cases like this one—sealed by murder, or torn open by rape—that would eventually go cold, pinned on SUSPECT UNIDENTIFIED.”

Baffling to those of us raised on Law & Order, and even something Nasser acknowledges when imagining his performance stacked against the fictional detectives of CSI. How do you solve a crime without knowing the identity of the deceased? Without having a photograph of the victim? But this crime takes place outside the viewing guidelines of the Western mind, for The Lane of Many Heads is a narrow alley in the heart of Saudi Arabia’s Mecca, a place where a woman’s modesty is so tightly woven with her family’s honor that no one will identify the corpse for fear of slandering a neighbor’s reputation.

Murder is a lesser crime than that of a woman behaving with immodesty.

Only the Lane knows all, and the Lane occludes her revelations at every neighborhood shack and pothole. The novel, delving deeper into her history, into the lives of her inhabitants and the dark secrets they hide, swirls like the unending penitents circling Mecca’s Holy Kaaba day after day.

There is Detective Nasser who, as a child, witnessed his father murder his mad sister after she returned to their home without any clothes. There was no conversation between father and daughter, no attempt to find out why she was naked, just the swift bashing of her head with a coffee pot. Cause of death was listed as an “asthma attack” even after an aunt went to the authorities and told them the truth; shame befell the family, not for the father’s fillicide, but for the fact one of his daughters was seen undressed by neighbors.

There is Sheikh Muzahim, a local shopkeeper who suffers from dementia and is the father of one of the missing women. A fifteen-year-old girl buys a candy bar in his shop, and he suddenly proposes to her. After their wedding night, he forgets he locked his new bride in the storage room with all of his sweets, which, in her terror, she ravenously consumes as days go by. When he finally remembers her, he sends her home, deflowered, fattened, rejected.

There is Umm al-Sa’d, whose four brothers, unwilling to share their inheritance, lock her in a back room and feed her apple peels. Thinking she is dead, they toss her body in the street for the dogs. But, triumphantly, she lives and thrives, her mother’s jewels hidden between her legs where her brothers, though they may keep her captive and starve her, would never look.

The Lane’s almost compulsive anecdotes and back stories echo each other in the reiterations of misogyny, casual violence, cloistered women desperate for escape. Women move unseen and voiceless behind closed doors; they are loathed, feared, erased. But Azza, through her charcoal sketches, articulates revolutionary desires, emphasizing the value of the female body. And the emails of Aisha, whose name aptly means alive, are curious, sexually frank, provocative. Detective Nasser, made uneasy as he reads, thinks to himself, “She ought to be put to death.”

The play between Azza and Aisha, the details of their own quiet but vivid lives, and especially their relationship that fluctuates between friendship and hostility, is the most fascinating thread in the novel. But it often gets lost and diluted under the barrage of Turkish madams, orphans, sewage cleaners, mannequins with or without movable legs, newspaper articles about ancestors and spoiled meat, tales of veil monsters and sleepwalkers, characters on the verge of madness—even Nasser himself “couldn’t tell the difference any more between what was real and what was delusion.” Add a mysterious amulet, a missing key, shady real estate dealings, and the richness of the details begins to overload the senses.

Granted, the meandering story lines mimic The Lane of Many Heads, her paths, death ends, and everyday moments of the quotidian. These intense anecdotes are reason enough to read The Dove Necklace, illuminating a world many readers have no chance of ever experiencing (it is illegal for non-Muslins to enter the holy city of Mecca).

But the identity of the victim and the missing girl’s flight, the solving of the murder itself, frays and cracks under the weight of unnecessary obfuscation. For all the teeming and scintillating turns throughout, as the Lane forewarned, there is very little the reader will know for certain when the end of her alley is reached.