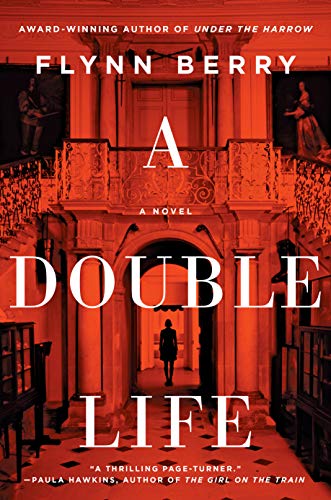 Psychological suspense has a new reigning queen. Flynn Berry, author of Under the Harrow, which won the 2017 Edgar Award for Best First Novel, cements her place in the genre with her latest offering, A Double Life.

As in all good psychological suspense, Berry forges a dark and sinister atmosphere from the very beginning. Heading down a quiet street, the protagonist walks “past the newsagent’s, the betting shop, the lap-dancing club. In the next window, a man reclines in a chair while a barber brings a straight razor up his neck.”

Though similar to her debut—a woman investigating the actions of a violent man—Berry creates a very different heroine in her sophomore novel.

When she was eight years old, “Claire” experienced a terrible crime. A man bludgeoned her nanny, then, turned his attack on her mother. After her mother fled the scene to find help, Claire discovered the nanny dead in the kitchen, covered in blood.

The most likely suspect in the hideous crime is Claire’s father, a man with the connections and financial means to disappear.

Some daughters might spend their lives trying to forget and move on, but Claire is caught up in the nightmare of the crime. She plays out, over and over in her mind, the last time she saw her father. Out to dinner the weekend before the murder, he gives her a stick of peppermint. For Claire, “the scene seems grotesque. The little girl, accepting a stick of red-and-white candy from him. It’s like he made me complicit.”

That sense of complicity compels Claire to keep searching for her father even as she moves forward in her life, navigating medical school and becoming a successful doctor.

Unlike the main character in Berry’s previous work, Claire never feels unreliable. Instead, reality shifts under her feet. Alternative possibilities for what happened that night, doubts about her father’s participation, and his ability to stay hidden despite a worldwide manhunt, casts suspicion over what she believes to be true.

But she doesn’t give up. She’s trapped instead in the need to know “who he is. A good man who did a bad thing. A bad man who’s done more bad things.” Or even an innocent man, who had no choice but to go on the run.

Berry’s strength as a writer is her ability to create complex, flawed, but riveting characters. Characters who move the story forward through their compelling drive to uncover the truth, no matter how awful that truth might be.

Her style is a stark but poetic and concise prose. Her sentences are simple on the surface, but layered despite their economy, as in her description of Claire’s brother, Robbie. “My brother was only fourteen months old at the time of the murder. He didn’t remember any of it, we told him when he turned sixteen. I think that must be worse. He’s so angry. We both are, but you can see it in him more.”

A Double Life is an exploration of the long-term effects of violence and the impact of crime on both the victims and the family of the guilty. These personal experiences are investigated against the larger backdrop of social class and gender, what rich men can do to women and how we, as a society, assess those crimes differently.

The novel asks the question: Can money buy freedom no matter the hideousness of the crime? The answer is more complex than yes or no, as Claire discovers by the end of the novel. Perhaps more importantly, however, readers will discover what happens to the person who asks.