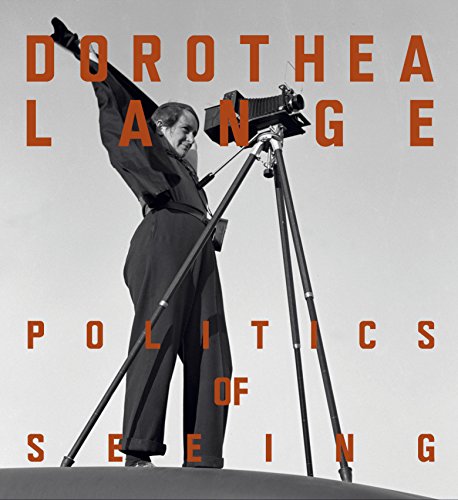 “As a biography of Lange’s ‘visual life,’ her aesthetics, and her activism, this book lives up to Lange’s own belief that ‘Beauty is a byproduct. It happens when the thing is done very, very well.’”

“Is it possible to say anything new about Dorothea Lange, her life or her work?”  This is the question critic and essayist Abigail Solomon-Godeau asks in “Reflections on an Archive” found within the newly released photo book catalogue, Dorothea Lange: Politics of Seeing, an accompaniment to the first major exhibition organized in the UK and France in over 20 years dedicated to Lange.

Indeed, as Solomon-Godeau notes, Lange has one of the most substantial bibliographies of any 20th century photographers, including biographies, monographs, collective studies, anthologies, recordings, films, and hundreds of articles.

Nevertheless, the exhibition drawn from Oakland Museum of California’s collection of over 40,000 negatives, 69 volumes of contact prints, 6,000 silver gelatin prints, and a vast collection of documents and papers presents Lange’s work from multiple political perspectives, including the politics of gender, economics, journalism and documentary policies, governmental propaganda, and the relations between aesthetics, ethics, and politics of the times.

Dorothea Lange, often considered the mother of documentary photography as we know it today, believed in the artful protest: that seeing the effects of injustice could help provoke reform. She is best known for her iconic image called Migrant Mother taken for the Farm Security Agency in 1936. It is one of the most recognized pictures in the world, according to her biographer, Linda Gordon.

Lange went on to form a career making images for the FSA and the War Relocation Authority. As a result of this work she is most often associated with her images from the Great Depression.

Yet Lange was a portrait photographer before the 1930s and created a lifetime oeuvre of works as a “visual activist” after WWII. The purpose of the exhibition and volume of images and essays found in Dorothea Lange: Politics of Seeing is to “redress this imbalance and reposition Lange as a critical voice in twentieth century photography and a founding figure of documentary photographic practice.”

In addition to the body of photographs contained in this book, contributions by Lori Fogarty, OMCA Director; Jane Alison, Head of Visual Arts at the Barbican Center in London; and Martha Gili, Director of Jeu De Paume, Paris, along with three compelling essayists, create stimulating context to successfully meet this agenda.

In his essay, “Dorothea Lange and the Politics of Seeing,” curator Drew Heath Johnson explores the tension between individual expression versus the politics and demands of the state that employed Lange (FSA and later US War Department).

His essay provides insight into her early life and how this transformed into her documentary sensibility. Mostly sympathetic to her philosophies that combine both aesthetics and activism, Johnson distills her creeds and motivations, linking them with the projects that span her lifetime. He leaves us with the ultimate charge of the documentarian as, in Lange’s words, that “The good photograph is not the object. The consequences of the photograph are the object . . .”

Writer and curator David Campany takes a hard look at what it means to be iconic in his essay on Lange’s photograph, The Migrant Mother. Outlining the governmental politics of the time and how they interfaced with the publication industry, Campany explores values and meaning that are provided to an image by captions, editing, and the press as an institution.

His discussion of Lange’s images, personal politics, documentary photography, moralism, semantic instability of the documentary photograph and  how that can be used within political frameworks is wholly provocative and presents us with alternatives to viewing this image, and Lange’s work in general.

Abigail Solomon-Godeau answers her question regarding a fresh look at Lange’s work by exploring the politics of gendering Lange’s FSA production, the canonization of her life and work, the preclusion of complex accounts of her personal politics, the exclusion of her wider range of contemporaries, and broad spectrum of political alignments, identifications and practices that she operated in culturally.

She goes on to challenge Lange’s idealism and the unintentional consequences of moralism and empathy as paths to change, and how that can be used to distort the intention of the photographer.

Solomon-Godeau then tackles the task of how to place Lange’s lifetime work with an oeuvre, how to construct a signature style. This she answers with an exploration of styles within the various periods of Lange’s work, the consideration that any work is “heterogenous, mobile in meaning, changing according to what is made of it, and with it. To congeal her work into a canon, relegating it to the ‘pastness’ of three decades in the twentieth century, risks making her work irrelevant in and for the present.”

Overall, this work is impressive in content and product. With over two hundred of Lange’s images divided into periods of her life’s work, often subdivided into styles within each section, chronologically presented, with plate notes, captions, an extensively annotated Chronology by Jilke Gorbach, as well as the fresh and politically focused approach provided by the three essayists, the work is exceptionally comprehensive.

In form, as an oversized, matte paper volume, it is aesthetically pleasing. As a companion to an international exhibition the volume provides the essence of the curators’ vision. As a biography of Lange’s “visual life,” her aesthetics, and her activism, this book lives up to Lange’s own belief that “Beauty is a byproduct. It happens when the thing is done very, very well.’” This book is done very, very well.