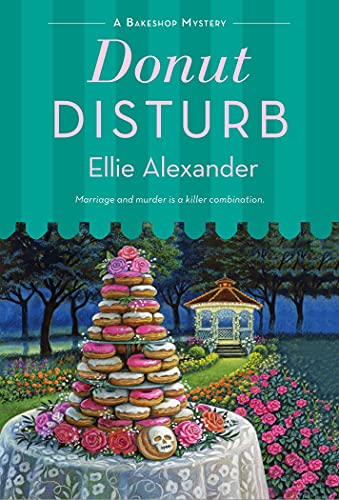 “For anyone looking for a new cozy this book will be a disappointment.”

In her recent cozy mystery, Donut Disturb, author Ellie Alexander presents a typical premise—Juliet Capshaw, owner of her bakery, “Torte”, is preparing to cater her friends’ (Thomas and Kerry) wedding, when a murder occurs. Juliet (Jules) discovers Brett, a quiet and introverted bassist of Heart Strings, the band hired to perform at the wedding, is murdered with the blunt end of his instrument.

Kerry’s estranged father, Jamie, just out of prison, appears unexpectedly on the day of the wedding and becomes a prime suspect. It’s up to Juliet to investigate and solve the crime.

Here Alexander has some deviations from the typical cozy in that the police chief, her stepfather, asks for her help. Not usual in a usual cozy, but an interesting change.

Alexander presents several characters who each had a motive. Dani, the leader of Heart Strings, has been in a dispute with Brett over the direction of the band’s future; Jamie, who served time in prison with Brett is being blackmailed by the victim; Mimi, the octogenarian judge was seen arguing with Brett, and even Randall, one of Brett’s bandmates who showed little emotion about Brett’s death.

Each of these issues would make for a good cozy mystery except for one thing. Alexander inserts distractions in multiple places in the story, directing the reader away from the story.

In particular, Alexander spends copious amounts of time explaining recipes. In one particular scene, she spends two pages explaining how Jules makes a particular recipe for dinner, then dessert, then drinks, then how she sets the table, how everyone eats, and it is not until we get through those detailed descriptions that her character comes back to solving the murder.

This would not be a difficult technique if it did not occur in sooooo many places in the story. Alexander would have a good story were she to reduce those scenes to perhaps one paragraph, and then get on with the investigation.

Now, having said that, Alexander is not a debut author, and perhaps her fan base likes these descriptions. If that’s the case, then her fans will not be disappointed. For anyone looking for a new cozy this book will be a disappointment.