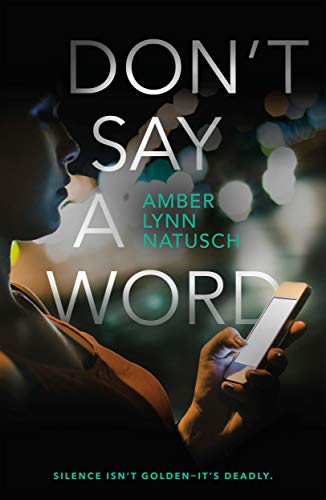 The second novel in Amber Lynn Natushch’s Hometown Antihero series, Don’t Say a Word, plunges the reader into the action from the first sentence as narrator Kylene Danners wakes up in a hospital chair after a vicious encounter with a needle.

Seamlessly picking up the story from the first book in the series, Dare You to Lie, Kylene continues her uneasy partnership with rookie FBI agent Cedric Dawson. Posing as Kylene’s pretend ex-boyfriend at the local school in an attempt to discover the recruiter for a teenage sex ring, Dawson is determined to uncover who’s pulling the strings behind the scenes.

To enrich the plot further, Kylene’s FBI detective father has been convicted of murder, and Kylene is intent on clearing his name. While Kylene’s anxiety about her father surfaces from time to time, the main focus of the narrative is catching the culprits exploiting young girls for sex.

The investigation takes a turn for the worse when a girl, calling herself Jane, contacts Kylene for help. She is terrified that she will be coerced into becoming the next recruiter, revealing that the last recruiter has been killed. Jane’s refusal to speak to anyone but Kylene conveniently disables all Dawson’s attempts to oust Kylene from the dangerous central action in an attempt to protect her. Kylene has a knack for landing smack dab in the middle of the action, which ebbs somewhat in the middle of the story as Kylene ponders suspects and juggles the complications of her various relationships; but the dramatic end makes up for this.

The story is peopled with suspects, mostly men whom Kylene knows well, as might be expected from a small town. Jasperville isn’t painted in a positive light; small-town small-mindedness rules the day here, with Kylene viewed as Public Enemy Number One for bringing down the dangerous Donovan (in Dare You to Lie) because he also happens to be football star, and Kylene’s actions might have jeopardized the football season. Kylene is fortunate to have supportive friends who provide some comic relief and, in her friend A.J.’s case, sexual tension.

Kylene’s well-drawn character is full of amusing quips and retorts, especially in her interactions with Dawson. At their first meeting she greets him with, “I’ve never been more disappointed to not find a Jehovah’s Witness on my porch,” and maintains this humor, even during the book’s most frightening moments.

She is feisty, courageous, loyal, and determined, despite suffering realistic consequences from the darker side of her sleuthing, which results in the form of sleeplessness and nightmares. Her exceptional bravery shines throughout, enabling us to identify not only with A.J.’s attraction, but with the increasing warmth in Dawson’s feelings for her, obvious to everyone except Kylene herself.

Disturbing social issues are interwoven into the fabric of this fictional story as the targeted girls reflect common biases of society; Kylene doesn’t know Jane or the other girls, despite the fact that they go to the same school: “A girl like you wouldn’t be friends with me,” Jane tells Kylene, who realises with a jolt that these girls are “throwaways,” lacking social standing and familial support, invisible enough not to be missed if they disappear.

Suspects include everyone from school staff to Muay Thai coaches to ice-cream shop owners, and like any well-done murder mystery the reader eagerly gathers hints and reaches incorrect conclusions, only to be as shocked by the truth as Kylene herself, in an explosive ending.

A murderer is caught, but the main perpetrator is still on the loose. Don’t Say a Word ends as it started, ready to move seamlessly to the next book in the series with the words: “My partner and I were going to bring down the AD.”