Don't Let My Baby Do Rodeo: A Novel 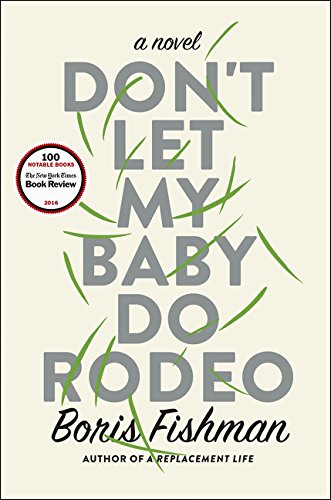 In his second novel, Don’t Let My Baby Do Rodeo, Boris Fishman continues his exploration of immigration, acculturation, and assimilation among Russian speaking Jewish immigrants in New York’s metropolitan area but with greater emotional power and even steamier sex scenes than his 2014 debut, A Replacement Life (also reviewed in NYJB).

In A Replacement Life Slava, a single twentysomething aspiring writer with one foot in immigrant Russian and one in American culture is recruited by his grandfather to ghost write fraudulent Holocaust narratives for reparations applicants, conduct his American born girlfriend considers a deal breaker and which makes readers want to shake him and tell him not to do it.

In Fishman’s new novel the main characters Alex and Maya Rubin are a married couple in their forties and parents to their adopted eight-year-old son. Like Slava and our author Fishman, Alex Rubin immigrated to the United States at age eight from Minsk, Belarus, with his parents Eugene and Raisa.

As a recent college graduate in New York City in the early 1990s he meets Maya, a Jewish undergraduate and aspiring chef from Kiev, Ukraine, who is in New York on a student visa to study a medical field that doesn’t interest her and dating Alex’s Russian gentile best friend. When her visa is about to expire Alex magnanimously proposes to Maya who seizes the opportunity and silently vows to herself to make the marriage work.

“She thinks: Alex, you are like a flower that grows on a barren ledge of rock face five thousand feet up. Down on the ground, where there is water and the elements are more kind, you don’t thrive, you become disoriented. You grow where there is not supposed to be growth. You survive there. As the rabbi talks, she makes a prayer of her own—guiltily; to a God she has ignored until now. Let us be tenacious together. Let us be constant in a mutual way. Then she makes herself look once more at the rabbi, and mouths after him the authorized Hebrew words that sound like cries from a pack animal.” But Maya is projecting; the rock flower metaphor fits her better than it does Alex, whom she does not yet know well.

Maya develops a fear of flying, and her ties with her family in Kiev weaken as Alex’s parents become her adopted if stifling family. A decade after their wedding Maya has given up cooking to become a radiology technician, Alex has gone into his father’s import/export business, and they’ve moved to suburban—almost exurban—New Jersey even though Maya doesn’t have a driver’s license. Since they are infertile Maya suggests they adopt.

The Rubins, parents and son, have a cultural bias against adoption, but are eventually convinced, though Alex insists on a closed domestic adoption and that the child be an infant. Because Jewish infants available for adoption are rarer than unicorns the Rubins have to choose between a white child from the rural parts of the United States with lighter hair and eyes than theirs or a Hispanic or African American child with darker features than their own. Fishman doesn’t mention that had they chosen international adoption they might have found an Eastern European baby that resembles them, and had they been open to adopting an older child they might have even found a Jewish child (Jewish parents are not immune to accidents and disease).

Eventually Tim and Laurel, a white Evangelical Christian pregnant teenage couple from Montana choose Alex and Maya because they appear emotionally and financially stable and live in suburban New Jersey (far from Montana’s rural poverty). Despite having agreed to a closed adoption they want to turn over the child in person. Tim is an injured rodeo rider, and the last thing Laurel tells Maya before leaving is “don’t let my baby do rodeo.”

Alex and Maya name their blond haired, green eyed son Max, and all is well until at age eight Max develops a fascination with nature—studying rocks in the bottom of a remote stream instead of coming straight home from school, comparing different species of grass (using his senses including taste), and fraternizing with deer who visit their property—that American born parents would probably encourage and try to channel into nature walks or ornithology but seems utterly foreign to the Rubins, who conclude that Max is a wild child governed more by his Montana genetic nature than their New Jersey nurture.

Here is one of the points in Don’t Let My Baby Do Rodeo where American born readers who have also read A Replacement Life may have a sense of deja vu. Just as such readers may have wanted to tell Slava, “Stop, don’t do this,” now they’ll want to tell Alex and Maya, “Relax, there is nothing wrong with this child.”

Of course were the Rubins to hear and heed such advice the novel would end half way through (besides which, if the Rubins are so averse to nature, why did they leave the city and move to the suburbs?). Instead, after consulting first with a fellow Russian immigrant child psychologist and then with a psychic, Maya convinces Alex that they need go to Montana to track down Tim and Laurel and ask them what is wrong with Max. Maya here is projecting her own sense of displacement onto Max and wants to give her son a chance to experience his native environment. But New Jersey is the only home Max has ever known, and the American west holds no fascination for him.

NYJB’s review of A Replacement Life  states, “despite the leaps of faith Fishman demands he provides more than enough correct details and well crafted figurative turns of phrase to convince most readers to go along with him . . .” Don’t Let My Baby Do Rodeo also requires suspension of disbelief and overlooking unlikely coincidences, such as Alex remembering the birth parents’ license plate number eight years later, and Eugene having a DMV employee friend who can find an address for that Montana plate number. They can’t find a phone number associated with that address, but that should be less surprising to readers than it is to the Rubins, since it’s 2012, and Tim and Laurel might not have a land line.

Thus Part I East concludes, and Part II West begins with a road trip in a Ford Escape from New Jersey to Montana. In Part II the narrative focuses on Maya’s emotionally powerful story, which leaves Alex and Max with only peripheral roles.

To avoid spoilers let’s just say that on the trip Maya undergoes a midlife crisis, and her increasingly impulsive behavior is governed by intuition and emotion more than reason—with potentially catastrophic results.

The plot continues to rely on coincidences and leaps of faith, but these are required to highlight the growing distance between Maya’s pursuit of her personal subjective truth and the impersonal objective reality in which the family finds itself. A trip intended to help the family turns out to both emotionally and physically endanger it.

Does this sound like a sexist cliche? The femme fatale role certainly can be that. It is up to the author to develop the role into a convincing, complex character, and here Fishman largely succeeds.

Don’t Let My Baby Do Rodeo fulfills and surpasses the promise of A Replacement Life. For a fictional look at adoption in Israel see Kin by Dror Burstein (also reviewed in NYJB).