Don't Breathe a Word: A Novel 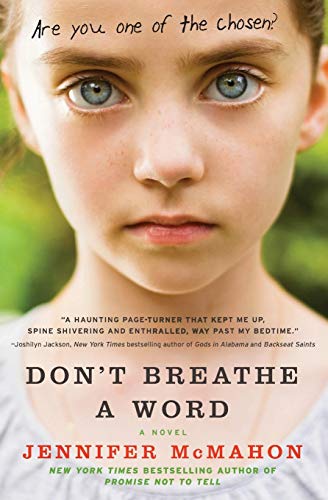 “Jennifer McMahon is such an expert at blurring the line between fact and fantasy that even the most rational person will begin to question what is possible and what is not.”

Jennifer McMahon (Island of the Lost Girls and Promise Not to Tell) weaves her latest supernatural, dark, fantasy tale of fairies and other unmentionables that go bump in the night.

Set in Vermont, Don’t Breathe a Word is told in Ms. McMahon’s oft used style of alternating chapters of past and present, deftly sorting and blending the two eras until just the perfect moment when she skillfully joins them together.

The story opens with 20-year-old Phoebe having a sexual liaison in a small-town hotel with a married man she calls Mr. Ice Cream. Nearby, in the rural, rundown village of Harmony, a 12-year-old girl named Lisa Navarro has just disappeared in the woods behind her home, allegedly taken by the Teilo, King of the Fairies, to be his queen.

Driven by curiosity, Phoebe asks Mr. Ice Cream to drive through Harmony so she can glimpse the tragedy up close. Upon arriving, a little girl in pink asks Phoebe if she’s here to see the fairies and promptly shows her a glove with six fingers. Before leaving, Phoebe looks up at the Navarro house and sees a sad little boy, wearing a Superman shirt, standing forlornly at the window.

Fast-forwarding 15 years, Phoebe is now dating Sam Navarro, the brother of the missing Lisa and the 10-year-old boy in the Superman shirt. Their meeting had been purely coincidental, initiated by Sam. At first, Phoebe doesn’t know he is the Sam until he brings her home to meet his mother.

With the anniversary of Lisa’s disappearance approaching, strange things begin to happen. After Sam receives a phone call telling him where to find the fairy book, which had been given to Lisa by the fairy king, Teilo before she disappeared. Then, Sam’s estranged cousin Evie calls with news of her own: She has received a note from Lisa saying she would be returning.

Cousin Evie spends a lot of time with Sam and Lisa and experiences all of the fairy mystery with them, although she seems a bit more involved than she lets on. Although they have not spoken in years, and in light of Lisa’s potential return, Evie suggests that she and Sam meet in person to discuss things—especially the book.

Evie and her husband Elliot meet Sam and Phoebe at the appointed spot to lead them to a secluded cabin where they’ll be spending the weekend. Although things start off normal, they soon take a turn for the surreal when a strange, old woman shows up at their door and proceeds to stab Evie with a corkscrew.

While Elliot takes Evie to the hospital, Phoebe and Sam chase the woman into the forest. Not only do they fail in catching a would-be criminal, but instead they become suspects themselves. When the police bring them back to the cabin at their request, all evidence that any of them had ever been there has mysteriously disappeared.

Shaken and confused, Sam and Phoebe track down Evie and find out she is not the woman from the cabin who had known things about Sam’s childhood that only Evie would know. From there, things only get worse as Sam and Phoebe struggle to make sense of it all, while trying to hang on to their sanity and each other. The danger intensifies when Phoebe become pregnant and learns that Sam, along with Lisa and Evie, has promised his firstborn to Teilo—despite not believing in the fairy king’s existence. Though Sam shrugs it off as childhood silliness, current events and a dark past family history make it very clear that Teilo is dead serious.

Jennifer McMahon is such an expert at blurring the line between fact and fantasy that even the most rational person will begin to question what is possible and what is not. A skillful storyteller, Ms. McMahon spins an incredibly intricate and complicated tale that is well thought out and masterfully told through vivid, vibrant characters that solidly stand on their own, yet effortlessly coordinate into a perfectly choreographed dance of nightmares and family dysfunction.

Ms. McMahon keeps the reader completely enthralled and totally off balance as she winds her way through dark and dangerous passages, guided by the machinations of a little girl who dreams of being a fairy queen in a world of shadows.