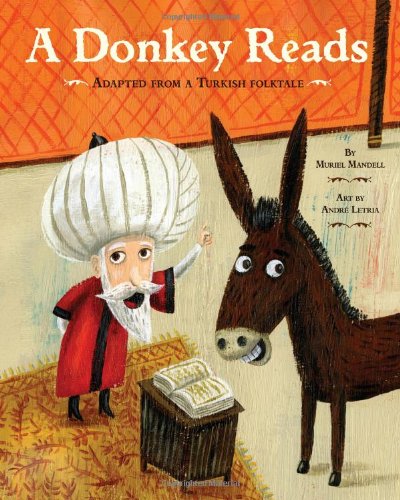 To pick up this picture book is to be transported right away to an older, simpler time and place. It conveys the richly colored but cruel world of Anatolia, now part of Turkey, where all the conquered villagers must pay tribute to the Mongol leader. Fortunately, the folks have the witty old wise man Nasreddin Hoca on their side, so one never knows when fate might twist into a kinder shape.

Based on one of the many stories associated with Hoca, the 13th century teacher, judge, and imam from Anatolia, Ms. Mandell, known for her science books for children, has crafted a sly, likable tale sure to satisfy a young reader’s taste for justice.

A highlight of A Donkey Reads is the vivid, thickly painted acrylics by the Portuguese illustrator Letria. His full-page illustrations evoke an exotic onion-domed world dominated by an angry Mongol tyrant, while spot illustrations convey, for instance, the frightened villagers’ bewilderment. Mr. Letria shows the Mustafo family in a double-spread illustration, with large, fearful eyes as they ponder their dismal fate. They have no fitting gift to offer the Mongol—nothing but their weak old donkey.

The reader then encounters a humorous, expressive double spread, enhanced by a vertical column of three humorous portraits of the wife, the husband, and the pointy-eared donkey. To their right, troops off a sad line of villagers, burdened with offerings to the greedy tyrant. The stooped posture of Mustafo contrasts tellingly with that of Nasreddin Hoca, who approaches delicate situations with an odd mixture of faith and humor.

Just as Mustafo suspected, the Mongol proclaims the donkey to be an insult and threatens the gift-bearer with a beating. Nasreddin Hoca, however, steps in to shift the focus from the Mongol’s rage to the wise man’s own quiet power. He backs up Mustafo’s assertion that the donkey has intelligent eyes. In his puffed, white turban, his triangular white beard, and paintbrush-shaped mustache, plus an absurdly round mouth, the sage looks more ridiculous than anything else. That, too, is fitting for a Nasreddin Hoca tale.

Tension builds, as Nasreddin Hoca makes the wild announcement that he will teach this donkey to read! Not even Mustafo, with his bewildered look, appears to have faith in his friend. It seems inevitable that Nasreddin Hoca will share the fate of a beating.

The wise man, however, knows exactly what he’s doing. He understands the nature of the donkey as well as the tyrant, and will use both to his advantage. Ms. Mandell reveals the trick at just the right pace for her audience, and the illustrator adds to the fun by depicting the donkey with an elongated red tongue turning the pages of a large book. Against all odds, justice prevails.

The author might have provided a clearer sense of that triumph by separating the story from her brief background information on Nasreddin Hoca. The book is, nonetheless, a welcome addition to the relatively scanty supply of Turkish folktales for children.