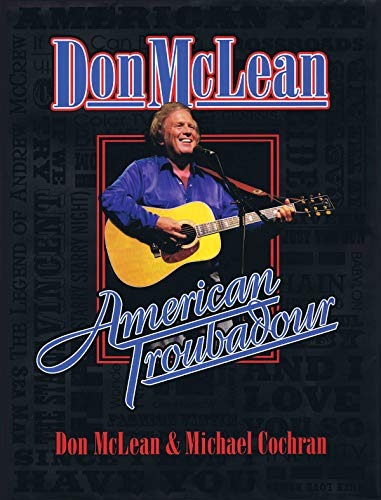 “. . . tells the story of his rise and details his devotion to singing, writing, and music as art forms.”

Under the guise of a biography, Don McLean and Michael Cochran have written a deep history of America that begins in 1945. Speaking in the voice of Mr. McLean, what they have written covers the growth of folk and popular music in the 1950s. They explain why Hopalong Cassidy meant so much to those who were just discovering television.

They document the earliest days of the suburbanization of America. There is the long road of a traveling musician. We read of the unrest of the 60s, the beauty of Maine and upstate New York. There is the confusion of the 70s and at the middle of it all is the life of one man who has taken a fascinating walk through the last half of the 20th century in America.

Along the way he has built a career that covers well over 30 albums and over 3,000 concerts and has enjoyed as loyal a loyal fan base as anyone in the history of entertainment. American Troubadour tells the story of his rise and details his devotion to singing, writing, and music as art forms.

As a musician Mr. McLean first grabbed the popular consciousness in 1971 with an eight-minute song titled “American Pie.” As Mr. McLean writes in American Troubadour, the song was actually much, much more than the story of Buddy Holly and a fateful plane trip. To read of how he constructed the song, how he determined its pace and what he was thinking of when he wrote it is a joy.

But “American Pie” is only one of his many accomplishments. Some prefer to remember him for Vincent (“Starry Starry Night”), his ode to Van Gogh. Others prefer the emotive and original vocalist who brought back “Cryin’” into the top ten. There are children who have been raised on his albums devoted to their small world. He sells out concerts across the world and as he honestly admits in his writing, has done what he can to stay true to the music and artists originally inspired him.

Prior to that amazing success in 1971, McLean had spent well over a decade building a career through woodshedding, studying songwriters and singers, and spending countless hours learning guitar and banjo. As soon as he could he was working in folk clubs and at camps and at festivals across America.

He played gyms, dances, intimate clubs and five hundred seat open air arenas. All of this before he cracked the top ten with a song that alternately documents rock and roll history with disappointment and heartbreak.

For a man who has been on the road for decades, it is only fitting that Mr. McLean opens the book with stories of the homes he currently enjoys. Having lived in trains and planes and cars and buses for years, it is the stability of a solid structure that today brings him the most joy.

That stability started in 1945 in New Rochelle, NY. Born to parents who thought that their childrearing days were done, Mr. McLean grew up amid the beginnings of American suburbanization. As he tells his story he moves through his family history and documents his own amazement at the arrival of television.

Early memories of singing for family and friends are matched by sitting at a broken down piano with his mother as he begins to become aware of harmonic possibilities long before he even understood what they were.

He documents in detail the records that influenced him and the singers he studied. He writes of learning finger picking patterns from The Weavers and a few years later learning a completely different style of playing from blues men such as Josh White. One of the reasons he has risen to the very top of his profession was his devotion to learning what he was doing.

Early on Mr. McLean began with a simple ukulele. Next he spent a good amount of time learning the banjo—a difficult instrument—he still loves to this day.

As a professional musician, Mr. McLean finds that guitars are a big part of his life. The book faithfully documents the guitars he has loved and the stories behind several of them. His appreciation for these instruments comes through every word he writes. The photographs of the instruments shine with the feel of the wood and resonate with the music that has been played through their bodies.

The pictures included also illustrate the early days in Mr. McLean’s life. There is not just the child he once was; the backgrounds and settings document an America that is part of our collective memory. Every picture holds something in the background—something that speaks of a larger picture. Small details such as this continually drop the reader into a world that many may have forgotten.

Photographs are a good part of the history that Mr. McLean writes. We see him playing with Pete Seeger, in the studio, at a concert being backed by the Jordanaires and the original Crickets, and standing next to Chet Atkins. We meet his family. He also tells of his love of the land and horse riding through the snows of the Northeast.

This is much more than the story of one man. It is the story of decades of American History and culture: long forgotten folk clubs, houses covered in snow, and artists such as Al Jolson and Garth Brooks—an amazing journey that so far has lasted over 65 years.

No detail of his life is left unexplored. From the sadness and his sense of unimaginable loss at his father’s early death to the joy of walking onstage at Central Park to a standing ovation as Garth Brooks introduces him, Mr. McLean writes with the same honesty and care he brings to his lyrics and music.

Previous volumes in Michael Cochran’s line of musical biographies include tributes to Chet Atkins and Les Paul. As with the tribute to Mr. McLean, they were made with the full cooperation of the musicians and document much more than the music at the heart of each musician’s story.