Don’t Talk to Strangers: A Novel 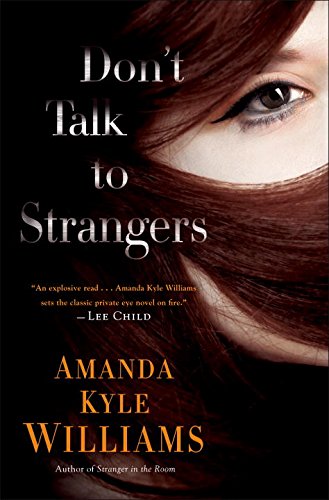 “The author does a masterful job throughout of ratcheting up the suspense and placing clues that make the reader believe the killer’s identity may be at hand. Then she routes readers in an entirely different direction. Well done.”

Her storybook job as an FBI behavioral analyst destroyed because of her love for alcohol, Keye Street made the next most logical career move: She becomes a private investigator. As such, her expertise in identifying serial killers catches the eye of Sheriff Ken Meltzer of Silas, Georgia. He has a sexual predator on the loose. The bodies of two young girls recently discovered in a remote area of Whisper, has that town on edge. Meltzer knows he needs more than his department’s investigators to solve the decade old case.

As soon as Street arrives in the small town of Whisper two things happen. Her Asian extraction causes her to stand out as a complete stranger, thus drawing constant attention, and an attraction to Sheriff Meltzer ignites a flame in her that she knows might be trouble. Although she has a live-in boyfriend, their relationship has become too comfortable. Keye is drawn to the sheriff, and the feeling is mutual for Meltzer; however, Keye quickly decides to keep her desire under control. Catching the skilled demon at large takes priority.

While still investigating the murders of the two young girls, another teenage girl turns up missing, throwing the town and the sheriff’s department into a chaotic state. Meltzer’s two detectives begrudge the fact their boss has brought in an outsider to help solve what they consider to be their case. They treat Keye with disdain and thwart her attempts to spearhead the investigation.

In their search for the killer, the investigation prompts the team to shakedown the town’s existing sex offenders. In the process, some interesting leads emerge, as well as some unsavory details about several of the town’s upstanding citizens.

The author does a masterful job throughout of ratcheting up the suspense and placing clues that make the reader believe the killer’s identity may be at hand. Then she routes readers in an entirely different direction. Well done. When the killer’s identity is finally established it comes as a complete surprise. Better yet, just when you think the story is over, Miss Williams plants a bombshell in the readers’ laps. Excellent.

As former law enforcement, two things jumped out at me while reading this otherwise well-written thriller. One, the author uses the term “clip” in describing a gun’s magazine. This is an often-made mistake by non-law enforcement writers. Second, in one scene she has the sheriff sitting in a restaurant with his back to the door. In the real world cops never sit like that, we always want a vantage point where we can see who is entering and departing.

Those minor points hardly detract from the book. Amanda Kyle Williams has written a fantastic story that makes me want to read the next book in the Keye Street series.