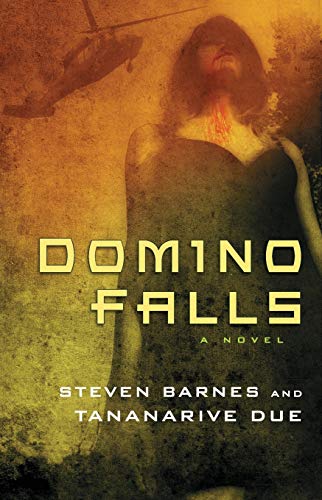 In a world ravaged by the zombie apocalypse, the well-guarded and well-fed town of Domino Falls seems like an oasis. But a group of teenage refugees finds that some humans are just as dangerous as the creatures that lurk outside the gates.

The monsters in Domino Falls are called freaks, not zombies, but they’ll take a bite out of any living person all the same. This is the second book in a series by the husband and wife team that began with Devil’s Wake. The first novel showed how teenagers from different backgrounds saw their families ravaged by freaks or get infected, forcing them either to run or put their loved ones down. Despite living in such a bleak world, the seven teenagers formed close bonds and even a couple romances as they survived the onslaught.

This novel opens as the seven teenagers sputter into the California town of Domino Falls in a broken down school bus. They’re relieved to find the first place that’s put up a secure gate to keep freaks out. The town has shelter and food—as long as they’re willing to work and abide by the rules.

But some of the teens are overwhelmed by the uneasy feeling that all is not well.

The town is run by a cult-like group called the Threadrunners led by charismatic movie star Wiles. Kendra is the first of the teenagers to see beyond the comfort of the town and realize that Wiles has been abusing his power and brainwashing the young woman in his camp. Several townsfolk complain that their daughters signed up with the Threadies and never came back.

It’s not apparent what exactly the Threadies stand for, whether it’s a religion or an extreme scifi fan club, but Sonia is obsessed with them and flirts with Wales. This upsets boyfriend Piranha, who literally saved her skin on their road trip. Even a real life hero has trouble competing with an action hero with his own line of books and movies.

Kendra’s boyfriend Terry would rather enjoy a few weeks without somebody trying to eat his face, but even his kisses can’t smooth over her notion that something terrible resides in Wiles’ mansion. They need Sonia on board to get close to Wiles. And even if the teens find something objectionable, would anything be bad enough to make them cross those gates back into the world of flesh-eaters?

Notice how I didn’t call them undead. That’s not an accurate term for the freaks, as Barnes and Due introduced a novel concept to explain the origins of the infection. It’s not magic or a government experiment gone wrong, but more of a science fiction explanation.

There is plenty of violence, of course, but nothing that goes too far, so the novel is exciting yet not too gruesome for teenagers. Horror fans looking for a gore fest won’t find one here. There is a heartbreaking scene at the end of the novel that had me cringing for the characters.

This is an engaging read for fans of speculative fiction. Its coming-of-age themes parallel many real-life scenarios, from growing up in a war-ravaged country to feeling overwhelmed when leaving the nest. It’s another worthy entry in a zombie genre that’s showing real legs, albeit with a lurching gait.