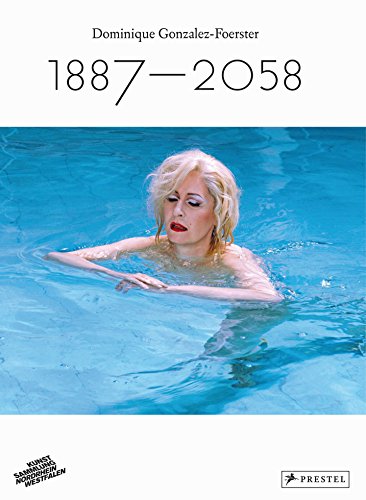 “The past and the future are her playground, and she relays an open invitation to all who seek a daring museum experience.”

“I have a dynamic relationship with the past,” says Dominique Gonzalez-Foerster. “It interests me when it’s like a possible future, when it’s used like it is in science fiction, not when it’s treated like a necrophilous memory.”

The artist investigates the past and future in Dominique Gonzalez-Foerster 1887–2058, edited by Emma Lavigne. The book coincides with the exhibit of Gonzalez-Foerster’s work at the Centre Pompidou, Galerie sud, and K20 Kunstsammlung Nordrhein-Westfalen during 2015 and 2016. Centre Pompidou and Gonzalez-Foerster have had a longtime working relationship. Each venue brings particular challenges to staging her work, which “defy any form of definition,” as Dr. Marion Ackermann says in the Foreword.

The book 1887–2058 showcases Gonzalez-Foerster’s works in a variety of media: video and live performance, opera, “apparitions,” sculpture, and installation. Within the book stills from her video and live performances are interspersed between academic essays, interviews, and email exchanges. The dates represent significant events in modernism.  1887 was the year Marcel Duchamp was born, and 2058 refers to her dystopian installation influenced by the film Solyent Green.

Like Matthew Barney, Gonzalez-Foerster oversees art films where the props become art objects exhibited in museums. She also has her coterie of historical touchstones, including Edgar Allan Poe, Emily Brontë, King Ludwig II of Bavaria, Bob Dylan, J. G. Ballard, and others. She not only reimagined opera, but also brought science fiction into the highbrow confines of the art museum.

Throughout her oeuvre she has explored the issue of modernity. “Modernity is like a character in itself, but one interpreted by many situations in many different contexts,” Gonzalez-Foerster remarks in “Selected Fragments,” a kind of glossary edited by Elia Biezunski. “Because of its fragility modernity ends up as an unfinished program and becomes even more beautiful for that.”

Modernity’s collision with the tropics becomes the focus of her 1998 film Brasilia. “Tropical conditions seem able to reveal the beautiful immature mess that generates modernity,” she says in Pablo León de la Barra’s critical essay, “Gardens, Parks, Landscapes, Environments, Exhibitions, Museums, Tropics, Beaches, Swimming Pools, Deserts, Microclimates, Immersions, Heterotopias . . .” At the heart of the essay is the tension between the extremely hot and humid climate of Brazil and the coldly rational architecture of Brasilia.

While the architecture of Brasilia hearkens to an abstract future, Gonzalez-Foerster also examines the past. One of her notable “environments” is Spledide-Hotel. This 2015 work involves an architectural recreation of a Victorian solarium, but also has elements like a neon sign and a gramophone. Ms. Lavigne explains, “Thus Spledide-Hotel can become a stage for Verdi’s Otello, an opera based on Shakespeare’s play and premiered at La Scala in Milan in 1887. . . . What matters are the short-cuts between temporalities and worlds that respond to one another and collide, between 1887 and today, the intimacy threatened by industrialisation and the development of cities, and the processes of emancipation.” The year 1887 becomes both a historical reference and a free-associative jumping off point. Gonzalez-Foerster plays with the elements of modernism the same the writers of Community played with pop culture references.

Dominique Gonzalez-Foerster 1887–2058 is a challenging book. The essays explain the themes of her work, but are written for a more academic and specialist audience. The book itself is handsomely laid out with large-scale photographs and stills from the films and exhibits. Since films are so integral to Gonzalez-Foerster’s oeuvre, it would have been useful for the book to include a video supplement in a Bluray disc. This point is mentioned because finding her video work is not easy. Even with these issues in the book, Dominique Gonzalez-Foerster represents a unique individual talent, one whose works, in her words, create “mutual, irreversible contamination, sometimes a fortunate or unintended hybridisation.” The past and the future are her playground, and she relays an open invitation to all who seek a daring museum experience.