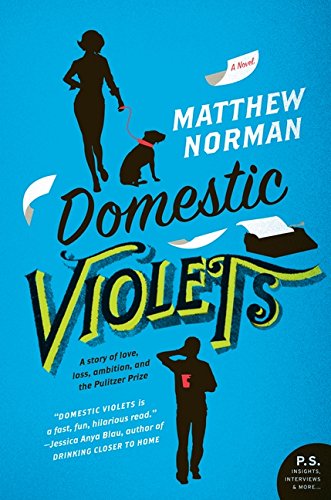 “It’s all there for the reader to expect the unexpected. Timing, so important in comedy, is also exacting in the Mr. Norman’s expert hands. . . . Domestic Violets leaves the reader satisfied by the intriguing plot written in a comic spirit; it also endears the author and hero to the reader for maximum poignancy.”

Domestic Violets begins with Tom’s anxiety about his increasing impotence. The account is probably one of the most hilarious of any recent book. Author Norman creates his own brand of understatement when writing about Tom’s anguish. He writes with a voice that might describe a local market running out of someone’s favorite beer. The effortless voice works to sustain the comedy, especially in the first third of the book.

As the plot deepens, problems become more widespread and more complicated. These are the problems that most families endure: jealousies, loss of employment, and (worse, love), feelings of helplessness, and grudges that will not fade.

Several of Tom’s problems involve divorces and stepparents—plus the relationships among these spouses—all in Tom’s life and in his lap, begging answers. Tom swims in this uncomfortable, often dangerous, sea, with a stroke akin to dog paddle. Yet, author Norman manages to keep his essential goodness--and it is large—intact, and to move even a dour reader. Succinctly, Mr. Norman creates a kind man who cares deeply about those he loves. Yet, Tom has confused feelings as he desperately tries to live with dignity when dignity is not natural to him.

Clearly, Mr. Norman has command of the rather mechanical devices of writing; he renders them fresh and new in their applications. He understands the ploy of layering humor, using tiers of irony of situation or an unexpected word choice or juxtaposition, hilarious overstatement, and occasional accounts of physical comedy.

Mr. Norman piles these up to an optimal effect. It’s all there for the reader to expect the unexpected. Timing, so important in comedy, is also exacting in the Mr. Norman’s expert hands.

Coincidentally, Domestic Violets is a very current book: It takes place in the time of a terrible financial collapse in America. The stock market is a disaster, and characters face the threat of unemployment. Uneasiness affects them as well; and in turn, that affects us as readers.

Pages of realistic dialog in Domestic Violets balance its humor and satire. Conversations between the husband and wife are natural, and disagreements that remain unsettled. Father and son, often in boozy conversations, lay bare fierce, previously unspoken, tensions. There are shocking instances--a faked suicide and poignant passages—a crying dog.

These and pages of Tom’s serious pondering give the reader breathing room to enjoy the flood of comedy just around the next page corner.

From start to finish, the book is a comic view of serious problems, but there is more. The backmatter, called P.S. on the book’s cover, is unusually rich, containing sections respectively called, Meet Matthew Norman, This Book May or May Not Be Completely Autobiographical, and A Conversation with Matthew Norman.

It also includes lists, not only of the music that Norman listens to as he writes, but also the lists of the books he reads.

Domestic Violets leaves the reader satisfied by the intriguing plot written in a comic spirit; it also endears the author and hero to the reader for maximum poignancy.