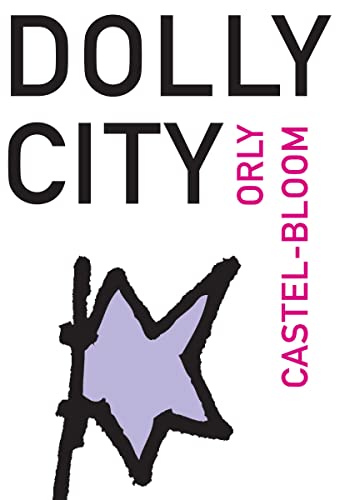 Dolly, the narrator of Dolly City, opens with a matter-of-fact, detailed description of cutting up a goldfish and eating it. Dolly states, “I took a plastic cup and fished out the corpse. . . . I laid the fish on the black marble counter, took a dagger, and began cutting it up. The little shit kept slipping away from me on the counter, so I had to grip it by the tail and return it to the scene of the crime.” This brutal scene is rather mild compared to what follows in Orly Castel-Bloom’s dystopian, darkly satirical novel.

Published in Israel in 1992 and now skillfully translated into English, this postmodern novel takes place in the lawless, violent, Mad Max-like Dolly City, “a city without a base, without a past, without an infrastructure. The most demented city in the world,” in which Dolly, a doctor of sorts who studied at the University of Katmandu, finds a baby in a black plastic bag and decides to become its mother.

And what a mother she is. Obsessively examining and performing surgeries on her son, Dolly exemplifies the overbearing, nervous Jewish mother who is paradoxically overly concerned about her child’s health but also sadistic and controlling.

The flat tone of the narrative and the blunt, deliberately unlyrical language used by the narrator are effective in this angry postmodern novel. Dolly asserts, “I hid behind a hillock covered with yellow evening primroses, which didn’t remind me of anything, and settled down to watch.” Later, in describing the rain in the foul Dolly City, the narrator asserts, “Rain in Dolly City isn’t just bullshit, it comes down thick as spaghetti, but for five years it hasn’t rained a drop.”

Castel-Bloom’s language declares that this is an anti-novel by refusing to use figurative language or choosing particularly inelegant similes to describe an ugly world.

Castel-Bloom spares little as objects of her satire. Dolly, the narrator, wields her scalpel on just about everything, including motherhood, Zionism, war, the Holocaust, authorities, corporations, and modern medicine.

The love/hate relationship a mother has for her child is Castel-Bloom’s most pointed and developed object of attack. Not only does Dolly perform multiple surgeries on her child, Son, including a pointless kidney transplant to ensure that he’s healthy and free of any defects, but she eventually has him attached to her back so that, as she explains, “I would be able to incorporate him inside myself and forget all about him.”

Dolly both wants to protect her child from harm and “whatever diseases were out there” but also tries to drown him and kill him. As Dolly sums up her ambivalent relationship to motherhood and her child, “When I wasn’t rummaging in his insides, I didn’t pay attention to him at all.”

Son’s body is also the locus of Castel-Bloom’s critique of Zionism and Israeli nationalism. One of her many surgeries entails carving the map of Israel on his back. She states: “I took a knife and began cutting here and there. I drew a map of the land of Israel during the Biblical period on his back. . . .” The language that Dolly uses to justify her overbearing mothering of her son is similar to that used to explain the defense of the state of Israel. She explains: “I only wanted to protect him from harm. I wanted him to live to a hundred and twenty, and what’s wrong with that? I wanted to be in command on all fronts, and what’s wrong with that? . . . I’m not entitled to demand sovereignty over the defense of my son?”

Dolly City even tackles such taboo subjects as the Holocaust and its role in the founding of the state of Israel. For example, Castel-Bloom mocks those who see all Germans as evil Nazis, when Dolly justifies obtaining a kidney for her son by removing the kidneys of and ultimately killing many children in a German orphanage. The kidney acquisition also touches on the novel’s critique of modern medicine. The novel refers to numerous examples of impersonal, compassionless, expedient forms of medicine practiced in Dolly City where Dolly, along with most of the other inhabitants, pops multiple anti-depressants at a time—pills that have no effect.

While sharp, highly original, and even funny at times, Dolly City, after a while, feels like a joke that’s been repeated too many times. The anger and satire are relentless. Dolly City might be more effective as a short story in which the objects of satire were narrower and more focused. Castel-Bloom’s work is a thought-provoking, exciting reading experience that is oddly both a breath of fresh air but not a ray of sunshine.