Dolled Up to Die: A Novel (The Cate Kinkaid Files) (Volume 2) 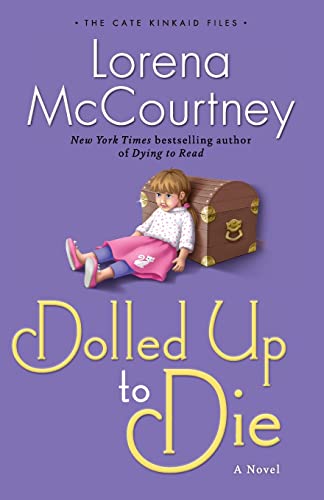 Lorena McCourtney is a two-time winner of the Daphne Du Maurier Award of Excellence. She has also won the American Christian Fiction Writer’s Mystery Book of the Year. Knowing that information helped me begin reading Dolled Up to Die, particularly since a doll appeared on the front cover. Once I got into the story, any trepidation I had about the book being about dolls soon disappeared.

Dolled Up is the second book in The Cate Kinkaid Files in which the protagonist, assistant private investigator, Cate Kinkaid, immerses herself in a case that has some very interesting surprises and plot twists. The premise of the book is a phone call from a distraught woman about a triple homicide. Surprisingly, the police refuse to respond.

Perplexed about the lack of police participation, Cate agrees to check things out. She arrives on the scene and discovers the murder victims aren’t human—they’re dolls. However, Cate soon discovers a real victim at the crime scene, and thus a disjointed, sometimes comical investigation ensues.

Ms. McCourtney’s characters are interesting and her writing style is comfortable. She creates just the right amount of tension to keep the reader turning the page, combined with a bit of comic relief. Cate’s character is a very loveable klutz whose biggest flaw seems to be her inability to pay attention to detail; however, that very flaw endears her to the reader as we watch her get become embroiled in some very entertaining predicaments.

Dolled Up to Die contains some very engaging plot lines that are sure to draw readers in: an ex-husband who marries a trophy wife; a motorcycle riding boy toy; and a love interest for Cate who is smart, tech-savvy, and always in the right place at the right time.

The book carries a subtle Christian message, which makes it suitable for younger readers as well. Even though it is the second book in the series, Dolled Up to Die fares very well as a standalone.