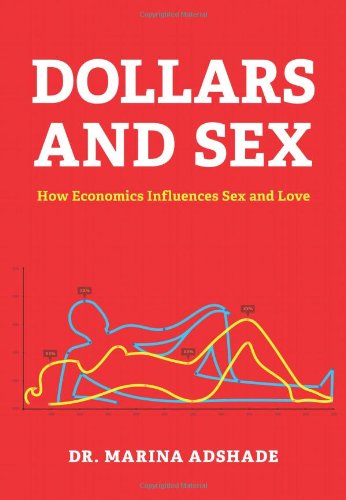 “The subject and style of Dollars and Sex challenge conventional thinking making it a most stimulating and rewarding read.”

What role do property, wealth, and money play in love? Is a person loved for his or her inner essence or for money? Is sex bartered for money?

These core cultural questions have been explored in many contexts. In William Shakespeare’s classic drama King Lear, the king’s third daughter Cordelia refuses to traffic in the transactional connection between expressing her love for her father and pecuniary gain. In an eloquent speech, she proclaims connecting the two is prostitution.

It is exactly this connection between love and property that is at the core of Marina Adshade’s provocative Dollars and Sex: How Economics Influences Sex and Love.

The scope of Dollars and Sex extends far beyond the territory of prostitution. Not all readers may be comfortable with the topics the author explores, such as the economic relationships between “penis size and economic well-being . . . countries in which the average penis size is small tend to be worse off. As penises get bigger, however, national incomes increase but only up to a certain point, after which bigger penises are associated with smaller national incomes.”

The author’s exploration of Dollars and Sex blends the rationality premise of economics with contemporary behavioral economics, holding that people pursue interests that are as much or more motivated by emotions and misimpressions as by reason.

The author emphasizes that her approach employs “revealed preference”—what people actually do, rather than opinion polls about what they might do. To this end, the author observes, “Economic theories are not intended to describe the behavior of everyone in a society but rather the behavior or people on average.”

From her assessment of the shift of the sharp realignment of education and earnings prospects, the author draws the conclusion that “a young adult’s willingness to be promiscuous is tied to the cost of tuition in college: when tuition fees are high, youths tend to engage in riskier sexual behavior. This observation explains, in part, why the teen pregnancy rate is so much higher in the United States than it is in other developed nations with more affordable post-secondary education.”

Another provocative conclusion the author advances is “that many women, especially young women, will not date a man if he has had a child. Being a father suggests to women that a man has fewer resources and time than other qualified suitors.” This concern was succinctly expressed to the author by one of her friends, who remarked, “Why would I date a man who is off buying his children snowsuits when he could be spending that money on me?”

Today’s young women are “part of a new generation of highly educated women . . . who are more educated, on average, than are men. Finding a husband who is as—or more—educated has become more difficult as all women now compete for relatively few educated men.” These women, then, are “always on the prowl.”

The author points out that as with any and every service and commodity, the forces of supply and demand in the relationship market influence the who marries whom, for “men and women do not necessarily marry the types of person their initial preferences dictate: they marry the person that is both available and willing to be married to them . . . who is available in that particular subset of willing partners is determined largely by the decisions made by everyone else in the market.”

Dr. Adshade relates illuminating research concerning the interplay of race and earnings, specifically the earnings premium that applies on an overall statistical basis in mixed marriages.

Black women expect a Hispanic man to earn $184,000 more and a white man $220,000 more to be equally desirable as a black man. Interestingly, Asian women have much stronger preferences for white men than for Asian men, favoring a white man earning $24,000 less than an otherwise identical Asian man.

Regarding the income-attractiveness interdependency, Marina Adshade suggests the following wedding vow for a bride, “My husband. What you lack in stature and attractiveness, you more than compensate for with a level of education and occupational choice, and I value that this tradeoff is sufficient for me to choose you as my husband . . . I will sacrifice my own human capital for that of our children, in the knowledge that you will bring in sufficient resources for our family to insure our wellbeing. While it may not be rational, I will quell my inclination to behave in a risk-averse manner and pledge to invest in our marriage and my asset portfolios as if I expected us to be together until death do we part.”

The subject and style of Dollars and Sex challenge conventional thinking making it a most stimulating and rewarding read.