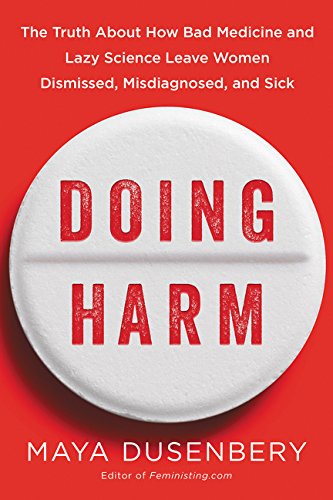 Maya Dusenbery has added immensely to the literature on women’s health in her important book Doing Harm by addressing the two biggest impediments to women getting good care: “The knowledge gap and the trust gap.” The knowledge gap refers to the fact that doctors simply don’t know enough about women’s bodies, their symptoms, or the diseases that affect them disproportionately, while the trust gap speaks to the stereotyping of women as unreliable reporters at best, and hysterical at worst. Her central and necessarily often repeated mantra is that women are either not trusted when they report symptoms or they are labeled crazy, malingering, or opioid addicted.

“This book is not about a few sexist bad apples within the medical profession,” Dusenbery says in her introduction. “It is about how all health care providers, like all of us, have unconscious biases by virtue of living in a culture that holds certain stereotypes about women.”

These biases are revealed over and over again as women share their first-person horror stories of trivialization, misdiagnosis, not being believed and more, whether they suffer chronic pain, autoimmune diseases, reproductive problems, heart attacks or other life-threatening emergencies.

Copious references to research studies and other books in the women’s health canon support women’s stories, and expose “bad medicine and lazy science” in compelling and convincing ways.

Women’s health activists will find much of what Dusenbery writes about familiar and validating, while younger readers will be exposed to information they desperately need as they increasingly interact with healthcare providers and institutions.

Dusenbery wants her book to be a wake-up call for these younger women, especially millennials, because “Now is an especially urgent time,” with many women in the United States getting sicker and living longer. “I hope this book helps women who’ve felt dismissed and unheard . . . see that their experiences aren’t just the result of bad luck or their own failings, but instead that they reflect deeper, systemic problems in the medical system.”

Chapter subheadings help to nail the problems being addressed. “Doctors think that men have heart attacks and women have stress” speaks to the frequency with which women are told their symptoms are due to stress, a theme played over and over again in the stories women share.

“It’s hard work behaving as a credible patient” underscores how often pain is deemed to be “all in your head.”

“This is not normal,” reveals how often women must insist on having diagnostic workups.

“The career women’s disease” points to the modern version of age old myths suggesting that motherhood and work are incompatible. (One influential “expert” on endometriosis said in the 1940s that the painful condition was on the rise because of “delayed and infrequent childbearing.”)

In her chapter on “Autoimmune Disease and the Long Search for a Diagnosis,” Dusenbery underscores the frustration of not being believed or properly diagnosed.  “Indeed, the long, frustrating search for a diagnosis is such a common theme running through the stories of women patients that many feel immense relief to finally get a diagnosis, any diagnosis. Being sick without knowing why is very stressful; being sick and told ‘nothing’s wrong,’ is more stressful still.” As one woman put it, “Worrying about being crazy is part of many autoimmune sufferers’ lives.”

Dusenbery’s work is comprehensive. “Young women aren’t the only group of patients who frequently find their symptoms dismissed as ‘normal’ by healthcare providers. The tendency to normalize symptoms associated with women’s reproductive functions finds echoes in the way elderly patients, trans patients, and overweight patients are often treated.”

Concluding her book, Dusenbery speaks to “challenging the power of medicine . . . in a medical system with a tendency to assume that anything it can’t explain is psychogenic.” She encourages women to trust themselves and the knowledge they have about their own bodies, and to share their stories with other women in order to be validated and informed so they can “overturn entrenched expert opinion.”  She encourages them to “find allies within medicine.” She applauds patient advocacy while calling upon funders, scientific journal editors, and researchers to get onboard.

Her final message? “Listen to women. Trust us when we say we’re sick. Start there, and you’ll find we have a a lot of knowledge to share.” Doing Harm goes a long way in arming women for the task.