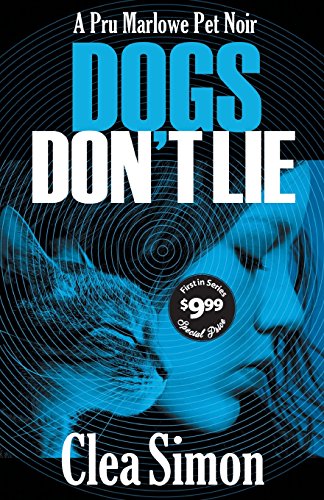 Animal behaviorist Pru Marlowe returns to her small Berkshires town for the final days of her mother’s life—or at least that’s what she tells herself. In truth, Pru is fleeing the big city in an attempt to escape herself—or more specifically, an issue that she’s having a difficult time wrapping her head around: Pru Marlowe can hear and speak to animals.

When Pru arrives for her daily walk with Lily, a rescued pit bull and former fighting dog, she can tell something was wrong. Upon entering the house, Pru finds Lily’s owner, Charles Harris, dead on the floor with his throat torn open and Lily standing over him with blood on her muzzle.

Although Pru knows that Lily would no longer hurt another animal, much less the human that saved her from a tortuous past, it is going to take a lot more than her word to convince the authorities.

Because Lily is traumatized by what she witnesses, Pru is unable to get information on the events leading up to Charles’ death. In an effort to piece things together, Pru tracks down clues and tries to fill in the blanks by talking to Frank, a masked ferret belonging to Alfred, the manager of the animal shelter, dogs belonging to various clients, and her own slightly snobby tabby, Wallis.

In her quest for the truth, Pru meets the handsome and charming Mack Danton who was Charles’s business partner; but rather than see him as a suspect, Pru begins to fall for Mack’s charms—and the town watches it happen. Now Pru will have to endure small-town gossip and conjecture as she attempts to not only clear Lily’s name, but her own as well, in the process finding out who really killed Charles—all while keeping her own animal instincts secret.

Clea Simon starts out strong; she introduced an interesting character (Pru), who has a remarkable ability to hear and speak to animals. Then a horrible murder is committed that implicates a very gentle, rescued pit bull with a violent past, who could be destroyed for a crime she didn’t commit, and because of Pru’s abilities, she knows that the dog is innocent, but can’t reveal how she knows.

Unfortunately, this is where the action and intrigue end. While Pru tries to exonerate herself and Lily as suspects, the reader is dragged through pages and pages of inaction. Pru spends most of her time talking to her attitudinal tabby, Wallis, who acts like she (the cat) has the murder already solved, but speaks cryptically as if trying to force her owner to catch up.

While the reader may be able accept a woman who can speak to animals, it’s slightly more difficult to believe a cat could have such in-depth knowledge of people and their motives—although the author does try to explain this by mentioning their penchant for television cop shows.

Halfway through the book, there’s still nothing of significance happening and even less of interest to provide the reader with the motivation to find out who killed Charles.

The first book in the in the Pet Noir series, Dogs Don’t Lie is neither noir nor much of a mystery. Though the concept is interesting in its Doolittle-esque talk-to-the-animals way, Pru Marlowe spends way too much time discussing things with her cat than she does using common sense.

The big reveal at the end fails to pack a punch or even stir any interest. Again, this is because the story contains way too much filler and not enough action related to the plot. Despite an interesting concept, Dogs Don’t Lie lacks in execution.