The Dog Who Ate the Truffle: A Memoir of Stories and Recipes from Umbria 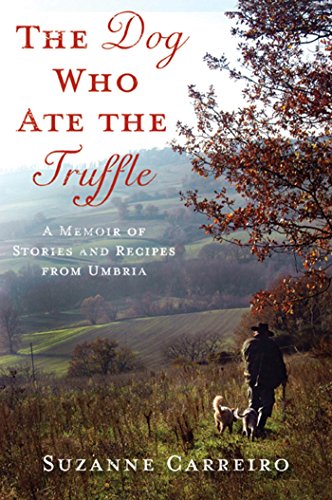 While it is true that you can’t judge a book by its cover, it is also true that titles can be equally misleading. With a title like The Dog Who Ate the Truffle, you might think you are about to embark on a witty culinary romp through the hills of Umbria something akin to Peter Mayle’s A Year in Provence. Sadly, this book is neither witty nor a romp, and what could have been a useful cookbook on Umbrian cooking gets lost in all the colorless stories about the home cooks whose recipes are represented in these pages.

In the first chapter we are introduced to Silvia, “an attractive woman with thick salt-and-pepper hair, muscular arms, and shapely legs that show when she wears short skirts,” a tomboy who claims she doesn’t cook. More bland prose describing Silvia follows until finally and abruptly we learn that “One day, after eating polenta con sugo at her house, I realized that she didn’t just have an opinion about cooking—she really could cook. Here is her excellent recipe for Polenta with Ragu—plus a few more of her favorite recipes.” Huh? Other than Carreiro telling us that she ate polenta at Silvia’s home, there are no stories linking the recipes with the cook.

Sometimes, there are no connections at all between the recipes in a given chapter with the story that comes beforehand. In the chapter entitled “My Acquaintances,” there is a story called “Hunting the Wild Asparagus” with not a single asparagus recipe—a great disappointment after having trudged through the deadly dull narrative describing the dangers of vipers while out collecting wild asparagus:

“Look!” called Luigi from below. . . . ”Did you see it?”
“The viper?” I asked, but then I saw a foot-long bright green lizard scamper away.
“When you see that lizard . . . you usually see vipers, he warned.
“Does your wife ever come with you?”
“No, but sometimes my son comes.”
“Why doesn’t your wife come?” I wanted to know.
He didn’t reply because some droppings had caught his eye. “Cingiale [wild boar],” he said. “They’re dangerous, but they only come out at night.” Then he said, “Both my wife and daughters are too afraid to come.”
“How often do you see vipers?” I asked.
“I’ve probably killed at least five over the years, but you always have to be wary.”

Two hours passed without seeing a viper. . . . By then we had collected at least two pounds of asparagi selvatici so we decided to head back. I was eager to get home and make asparagus lasagne.

You’d think that after such a build-up Carreiro would be equally eager to share her asparagus lasagne recipe with us, but apparently she was not.

While the stories may be colorless, the recipes are nevertheless sumptuous sounding and authentic (if sometimes time consuming). Unfortunately, because the book was organized around stories about the cooks, the recipes do not get presented in a cohesive way that would make The Dog Who Ate the Truffle a useable cookbook. There are no category headings for soups, starters, pasta, main dishes, etc. but rather a collection of recipes representing a little bit of everything at the end of each chapter.

When Susan Carreiro set out to spend a year in Umbria to research authentic Umbrian recipes, her intent was to write a cookbook. Unfortunately, she took a wrong turn and ended up with a “story-filled book with authentic recipes.”

What could have been a good specialty cookbook on Umbrian cookery, has sadly failed as both food memoir and cookbook. Sometimes our first instincts are the best.