A Dog Named Boo: How One Dog and One Woman Rescued Each Other—And the Lives They Transformed Along the Way 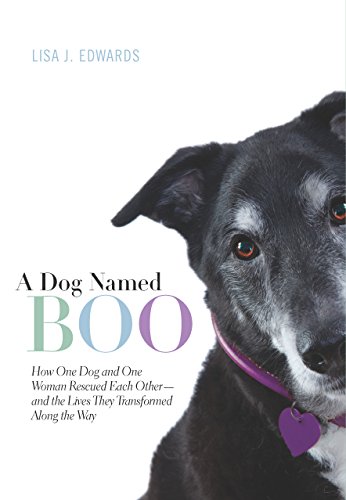 “A Dog Named Boo is a truly perfect book.”

A Dog Named Boo by Lisa J. Edwards will please dog lovers, but it is much more than a good dog tale.

Author Edwards explores many subjects: her own partial recovery from child abuse; a marriage in which both parties fight chronic illnesses; the complexity of training therapy dogs; and the success of Boo as a one of those dogs. Ultimately, Ms. Edwards delves deeply into both canine dependence on humans, and the ability of dogs to address therapy needs of both humans and other dogs.

Canine intelligence is currently a popular subject, and Ms. Edwards’ work is comprehensive, but never didactic. She clearly explains in a voice of friendly authority the complicated procedures involved in the training of therapy dogs. Further, each of her examples enlightens readers in a fresh way. She reports not only the success of therapy dogs’ work with patients, but also their failures.

Ms. Edwards finds Boo, the runt of an orphaned litter, in a cardboard box on a Halloween—thus Boo’s name. In spite of his poor sight, clumsiness, disobedience, and huge need for patience and unconditional love, he becomes successful with patients and others considered helpless. Somehow, Boo just knows what to do.

Ironically, Boo’s seemingly hopeless behavior and his apparent resistance to traditional training are important to the story insofar as they make his ultimate success even more triumphant.

Boo is a role model for everyone who has ever been troubled or ill or depressed. Boo’s surprising success with difficult patients is almost mysterious, but Ms. Edwards explain the magic.

In A Dog Named Boo, the many different anecdotes about Boo are all heartfelt and sometimes even humorous.

“The retrieve command is a chained command, which means that it’s made up of several foundation commands, in this case, go out, pick it up, carry it, and drop it. Boo was terrific at drop it but not so good at pick it up. His best drop it came on day when he trotted quickly past me with his head down—the signal that he had something in his mouth he didn’t want to lose. ‘Drop it,’ I said suspiciously, and out of his mouth came the pincushion filled with pins and needles.”

Ms. Edwards writes about her own tumultuous life and fragile health but details each experience objectively without self pity. The result is a book that seeks understanding from readers, not overly dramatic sympathy.

A literary finesse runs through A Dog Named Boo, one difficult to pinpoint. It might be called balance. For instance, the author knows just when to end a chapter and start a new one. And while the book is alive with unexpected turns, both good and bad, the reader never feels cheated. The author’s moving between the present and the past is smooth. And all the disparate bits are well integrated.

Since Ms. Edwards tells Boo’s story so well and because she tells so many peripheral stories well, too, A Dog Named Boo deserves as many “stars” as a critic’s rating system will allow. A pleasant surprise for readers, caregivers, and an inspirational gift to the infirm, the troubled, and the pessimistic, A Dog Named Boo is a truly perfect book.

Sally D. Ketchum is a prize-winning author and journalist. She has written about animals and the outdoors in many articles and essays and maintains a modest bird and small animal sanctuary outside her kitchen office window. She developed and taught a course in Outdoor Literature for Michigan high schools.