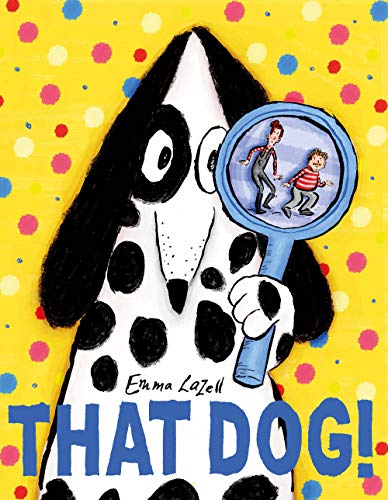 “That Dog! whimsically tells the tale that crime does not pay and showcases that dogs are not only our best friends, but on occasion, they are heroes!”

While avid dog lovers might bark at a children’s picture book that features stealing dogs from families, what author-illustrator Emma Lazell presents in That Dog! is a super silly tale of dog-outsmarts-dognappers. Bringing this point home further, Lazell’s cartoonish illustrations highlight to the younger reader that this story is a playful account of never underestimating doggie wit. Anyone familiar with Disney’s 101 Dalmatians will recognize such wit. Indeed, Lazell seems to borrow heavily from this storyline (e.g., dognapping spotted dogs, getting others to do the dirty work, dogs outsmarting people).

Penny and Pat are dognappers who from the start of the story let it be known, “You can never have too many dogs . . . and still want more!” And they have spotted a particular new dog in town—with spots. Penny is the brains behind the operation of taking dogs, and not-so-smart Pat is sent out to do the capturing. What they don’t know about this new dog, however, is that he’s quick, smart, a master of disguise, and very good at solving problems.

Penny reminds Pat, “Remember what he looks like—spotty all over.” This sets up the story plot as Pat brings home three different spotty-all-over animals: a wiggly, squiggly snake; a floppy-eared rabbit; and a scratchy, hissy cat. Evidently Pat is good at spotting spotty-all-over but not so good at knowing what a dog looks like. The very young reader will perhaps be tickled with such confusion and appreciate that Pat has a lot to learn if he is to be better at his unfortunate job.

Meanwhile, the yet-to-be-captured spotty dog is actually quite the detective. Lazell presents humorous hints in her illustrations as to how smarty spotty dog is setting up a trap for the eventual capture of these canine-thieving deplorables. Spotty dog reads in the local paper that there is reward set for the capture of the dognappers, and throughout this adventure doggie collects clues to bring Penny and Pat down.

Ultimately, there is a knock on the door of Penny and Pat’s dog-packed home. As they open the door, they are greeted by not just the police but smarty spotty doggie, too. The reader can now breathe a sigh of relief. “It looks like Penny and Pat won’t be getting any more pooches after all.  Thanks to that very clever dog!” Due to exceptional spywork, order is restored in doggie town. That Dog! whimsically tells the tale that crime does not pay and showcases that dogs are not only our best friends, but on occasion, they are heroes!