The Doctors Blackwell: How Two Pioneering Sisters Brought Medicine to Women and Women to Medicine 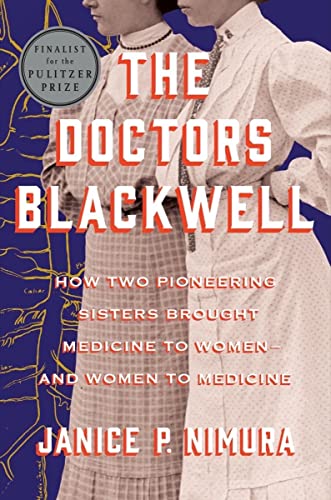 The first thing to say about Elizabeth Blackwell and her younger sister Emily is that they were formidable women. Intelligent, ambitious, hardworking, and determined, they achieved what no other woman had: they became noted doctors at a time when the idea of female physicians was total anathema, both in the U.S. and abroad.

However, like many other pioneering women of their time, they held surprising beliefs and were not always likeable. Despite living feminist lives of agency and autonomy, they were outspokenly anti-suffragists, decrying women’s ability to be free agents and trivializing their role in the world. Elizabeth, in particular, was given to making insulting remarks about the lack of intelligence and competence among females. In a letter to Emily from abroad Elizabeth wrote, “Oh, Milly, what is to be done with the women. . . . It is not her intellectual inferiority I lament . . . but if she were only grand in those qualities attributed to her, all might be well, but the petty, trifling, priest-ridden, gossiping, stupid, inane, women of our day—what can we do with them!”

Indeed, the narcissistic Elizabeth thought of herself as a kind of “benevolent deity” as author Janice Nimura puts it. Her sense of superiority, aloofness, and arrogance was largely responsible for her lack of true friendships, her isolation, and the absence of any rewarding relationship with men. When she rescued a child from a dreadful New York orphanage it was not an act of maternal longing, but the securing of a little girl named Kitty, who became a devoted lifelong servant who called her savior “Dr. Elizabeth.”

Nevertheless, the achievements of the two sisters were remarkable in a time when the objection to women entering the marketplace, let alone medicine, were universal. Elizabeth was the first woman to receive a medical degree in the United States in 1849 from Geneva College in New York, having been voted into the medical school by the male students who thought it was simply a joke that would be laughed away. Emily, at first a teacher, followed in her sister’s footsteps earning her M.D. several years later. Together they founded and ran the New York Infirmary for Women and Children as well as a women’s medical college.

Emily proved to be the better physician and a noted surgeon. Elizabeth was more engaged in administrative and institutional matters, in part due to an infection that left her blind in one eye. However, her drive to succeed in medicine was always more of an intellectual challenge than a call to service.

Over the course of their studies and achievements both sisters, especially Elizabeth, crossed the Atlantic several times where their fame grew. They mingled with the intelligentsia of the time as Elizabeth sought recognition, legitimacy, and financial aid. Among those they came to know were Florence Nightingale (who thought women belonged in nursing and not medicine), educator Emma Willard, feminist Margaret Fuller, author George Elliot, and Lady Byron.

Nimura’s biography of Elizabeth and Emily, along with their five siblings, is thorough and for the most part compelling. It is wide-ranging and involves the obsessively close family and the feminists two of the brother married, the social beliefs and norms of the time, and reveals the horrors of 19th century medicine, particularly heinous for women. (Elizabeth seemed willing to overlook the atrocities of Dr. J. Marion Sims, so-called father of gynecology, who conducted experimental surgeries on slave girls without anesthesia, later breaking with him as she did with Florence Nightingale.)

In the end, summing up Elizabeth Blackwell, Nimura writes she was “a woman who refused to accept human imperfection. . . . her determination often hardened into a rigidity that drove potential allies away. . . . Her refusal to compromise was the key both to her achievement and to her chronic isolation. . . . She never found people perfect enough to join her.”

Still, her contributions to the history of women in medicine are indisputable. By 1910, the year both she and Emily died, there were 9,000 women doctors in the U.S. (about six percent). Today 35 percent of physicians in America are women, and women comprise slightly more than half of medical students.