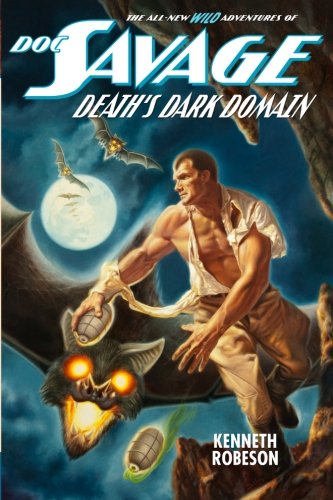 “It isn’t easy to write a character with 80 years of continuity while simultaneously pleasing old fans and drawing in new ones, but Will Murray does it.”

Winged creatures that seem to be made of smoke . . . floating blue eyes only visible in a mirror . . . an ocean liner with disappearing passengers . . . a monkey and a fur coat that really mean deadly anthrax . . . a wildly selfish man selling deathly weapons to the highest bidder in an international border dispute . . . a world war is hanging in the distance and only one man can arrest these multiple threats, preventing world destruction in the process.

Doc Savage, the Man of Bronze, and his finely honed team of associates stand ready to bring a halt to all this insanity.

This is adventure writing at its finest. Working from ideas supplied by Doc Savage’s original writer Lester Dent, writer and noted pulp historian Will Murray has created a storyline invoking the feel of a thirties pulp while never leaving the modern reader behind in some hazy nostalgic world.

The threats are real and the sense of danger as is possible failure for all involved. There are consequences to all the actions, and the possibility of death hangs over everything—but we know in our hearts that Doc Savage will come through no matter what.

The amazing thing about the story is not just the imaginative settings and characters, or the way he takes us around the globe from New York City to the North Pole and over to the fictional country of Tazan, it is the way Mr. Murray moves us at such a natural and unhurried pace. Unlike in many other pulps, which rush us from one fight scene into a life-threatening situation with near abandon, we glide along the story as he patiently reveals multiple plots one at a time until they begin to coalesce into the story. As with the best of Lester Dent’s original writing, Mr. Murray balances deeply developed characters with tremendous action. He also makes sure we know the characters and he gives many of them their time on stage.

In one highly enjoyable scene Savage’s assistant, Long Tom Roberts undertakes a transatlantic voyage under the guise of a private detective. As the next 20 pages unfold we see shipboard life in detail, the feel of the ocean’s breeze at night become real, and naturally, there is one seductive and very mysterious woman at the heart of what Roberts encounters. It is a wonderful little story within a story, an aspect of storytelling Mr. Murray excels at.

Only a character as strong as Doc Savage could surrender so much time to one of his crew. The amazing thing is that Savage is never far from Roberts’, or the readers’ mind. He hangs over every page of the book. This is because Doc Savage is one of the greatest creations in modern fiction. Originally conceived in outline by two editors at the pulp publishing house Street and Smith, it took the skill and vision of writer Lester Dent to make the character into what he eventually became. A seemingly impossible combination of scientist, martial artist, detective, inventor, and much more, Clark Savage Jr. was trained by his father from birth to become an exceptional leader and man.

Writing simultaneously for the new fan and the lifelong reader of Doc Savage, Mr. Murray incorporates much of Savage’s prior history into this new novel. The villain at the center, John Sunlight, is considered by many to be Savage’s greatest foe.

An early scene takes place at Doc’s Fortress of Solitude which is located at The North Pole. (Savage predates Superman and is often mentioned as an influence on the Man of Steel’s creation.) Mr. Murray even stages another scene at Savage’s legendary hospital in upstate New York. There he treats criminals and through his own knowledge of science and medicine and cures them of the desire to commit crimes allowing them to return to society. These are deep connections to the past for all who know Savage.

It isn’t easy to write a character with 80 years of continuity while simultaneously pleasing old fans and drawing in new ones, but Will Murray does it.

Savage had a long history in pulps, appearing in 181 adventures over the course of his initial run. Unlike many other characters that have lasted 80+ years, Savage has seldom been updated. And as demonstrated by the success of this new title, he works best when left inside his original era.

One of his greatest assets is his connection to recognizable locations. Savage’s headquarters are on the 86th floor of a building often recognized to be the Empire State building. He and his assistants travel the streets of New York City as often as they make their way overseas.

While his home was in pulp novels of the thirties and forties, Savage has been amazingly resilient and easily adaptable to other mediums. He has appeared in films as well as on TV and radio. There have been several successful comic book adaptations, and this presence in the four color medium has been consistent over the decades. The latest version appears in DC Comics in which he recently teamed up with Batman.

One of the things that kept Doc alive when pulps faded was a very successful run of paperback reprints of the original pulp stories by Dent. These books were published by Bantam during the sixties and lasted until the nineties. In addition to the high quality of Dent’s writing, the books were notable for the cover art by James Bama and are still highly sought after collectibles.

Doc Savage: Death’s Dark Domain is the fifth in a series of planned novels taken from notes made by Lester Dent, and Mr. Murray’s writing completely captures that world. This is a wonderful way to spend an afternoon—in the world of classic pulps, where there is not just the reality of New York City, but the feeling of Universal’s horror movies as well, a motif Dent was known for in the original.

Today pulps may be long forgotten, but at one point American publishing moved hundreds of thousands of magazines a month. They captivated millions of readers as the books themselves were passed from friend to soldier to son and then sister.

This is the world of pulp adventure done at the highest level of skill.