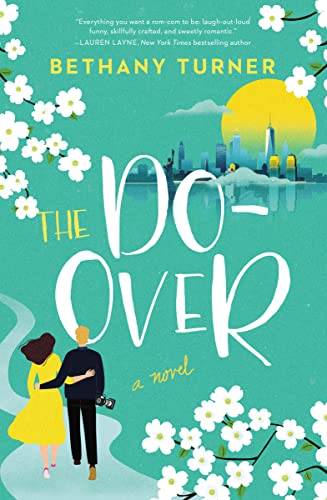 Readers who haven’t yet discovered the savvy, comedic rom-coms of award-winning author Bethany Turner are in for a treat with her latest second-chance romance, The Do-Over.

First, readers will enjoy getting to know the sassy, career-driven protagonist McKenna Keaton, a late-thirties unmarried woman who is perfectly content building a solid reputation as a no-holds-barred attorney. She’s spent years striving to become the next senior partner of her prestigious law firm. Of course, even the most career-focused women sometimes feel a spark of romance buzzing beneath their skin, as seen in the following scene:

“It’s not that I was the romantic type who made a habit of falling for her boss. I wasn’t. And I didn’t. In fact, I never really fell for anybody. I didn’t have a crush on him or imagine that he’d asked me to second-chair on Morinskey v. Alventa Pharmaceuticals, Inc. because he hoped to get me alone late at night after everyone else had left the office. No, he asked me to second-chair because I had proven myself to be the best at the firm when it came to researching precedent. And he’d probably called me Erin Brockovich because it was a charming way to cover that he couldn’t remember my name at the time. We’d never shared a stolen glance, and our fingers had never brushed against each other as we both reached for the same file folder. But the fact was the man was perfect for me.”

Still, those feelings can’t always be explored in a “man’s world,” especially when a woman has to try extra-hard to prove her own worth to the misogynistic older men in the office:

“Honey, what do you think this is?” Mr. Wallis asked. The chairman—who could have seemed grandfatherly with his white hair and twinkling eyes if not for a few characteristics (most notably the mistress)—leaned forward onto his forearms, which were resting on the table in front of him. “We’re not here to listen to your book report.”

Little does McKenna know, the overt sexism is the least of her problems, as a devastating work scandal sends her scurrying back to her hometown with her head hanging low.

Just when things seem they can’t get worse, McKenna learns of a family “curse” that could mean she has less than a year to live. This forces her to reconsider her priorities to make the most of what little time she may have left.

Of course, nothing is ever as simple as it seems. McKenna is a woman who can battle it out with fierce competitors in the cutthroat arena of the American legal system. So why is she feeling so intimidated to ask a man out on a date? Especially Henry Blumenthal, her teenage rival for high school valedictorian and the only peer who ever matched her intellect, even giving her a three-hour battle at chess back in the day.

Regardless of McKenna’s typical grit, asking Henry out proves to be a far greater challenge than she expects. Perhaps that’s because she can’t even remember her last real date. Or perhaps it's because Henry Blumenthal is no longer the shy nerd who kept her striving for the highest GPA. Now he’s a famed documentarian and the darling of Durham. He also looks like he could be on the cover of GQ!

While Henry seems to have achieved all his dreams and more, McKenna is suffering panic attacks, fighting false accusations of a crime she didn’t commit, and watching all her dreams unravel. How’s that for the girl who was voted “Most Likely to Succeed”?

And now this curse! What more could go wrong?

Lots! And Turner keeps readers guess as the twists unfold and McKenna joins Henry for a research project.

Turner not only delivers a relatable heroine, a loveable cast of characters (including the adorable Keaton, swoon-worthy Henry, plus lovely friendships), and a ten-year timespan that slowly reveals the ending, but she also keeps the pages turning quickly while offering us a big dose of lighthearted comedic cheer—a welcome relief after two years of pandemic life.

With no profanity, graphic violence, or detailed sex scenes, this “clean read” is also appropriate for young adults and would make a fun beach read. In fact, scenes like these are about as racy as it gets:

“Okay, who was I trying to fool? I did think research was sexy. And Henry had somehow made it even sexier.”

“‘In high school I didn’t kiss like this,’ he muttered against my throat, and then I felt his lips morph into a smile against me. He pulled back a few inches and matched his eyes evenly with mine, and I was able to see up close that what I had been referring to as teal actually included as many shades of blue and green as the Mediterranean from dawn to dusk. ‘In high school, I didn’t really kiss much at all.’”

“He raised his body, and though his weight was no longer pressed against me, I instinctively went with him away from the window, like a magnet. His fingers returned to my hair and tucked it behind my ears on both sides. ‘But, for the record, I did spend a lot of time in high school imagining how you kissed.’”

Sweet, right? While romantic comedy may not be the genre for every reader, many will enjoy this light-hearted escape, especially anyone looking to drift away with a well-paced, feel-good story.