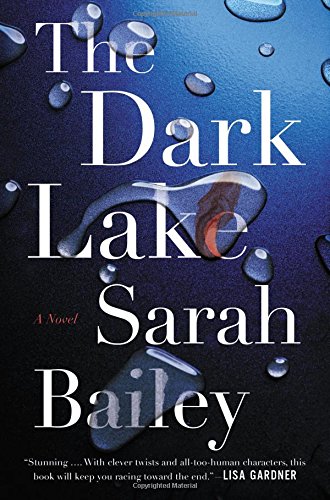 “The Dark Lake is a thrilling psychological police procedural as well as a leap into the mind of a woman engulfed in guilt.”

Australian Detective Gemma Woodstock is a woman in a whirlpool. Plagued with guilt—over the decade-old death of her high school sweetheart, her initial ambivalence of her son’s birth, her affair with her partner—she’s a woman coming apart at the seams. Into this mix of grief comes the murder of the woman who fascinated her as a teenager and became her rival in love.

Rosalind Ryan had been killed. After the eve of the triumphant opening of a play she wrote and directed, her body is found in Sonny Lake, a short distance from the tower where Gemma’s sweetheart, Jacob, fell to his death. Her body is covered with red roses, and she’s been strangled.

Investigation into Rosalind’s past offer intriguing contradictions and further make a mystery of a woman everyone was acquainted with but none actually knew. Friends, family, and teaching associates all insist Rosalind was a wonderful person. When pressed, they also admit she was a riddle no one understood.

“‘We’re hardly getting a clear picture of her, are we?’ asks Felix. ‘It seems she was as much a puzzle alive as she is dead. Most everyone seems to have liked her but in a removed sort of way.’

‘Trying to nail down her personality is hard. A lot of people liked her and an equal number didn’t. She didn’t seem particularly close to anyone.’”

Gemma must lay aside her teenage dislike of Rosalind in order to discover her killer. “Keep trying to figure out who killed perfect, precious Rose Ryan. The perfect girl who ruined everything.”

There are plenty of suspects in both the victim’s current and past life, including Gemma herself, for Rosalind stole Jacob from her in the short days before he took his own life. Jacob’s lookalike younger brother, Rodney comes under suspicion, and his likeness to Gemma’s lost love as well as his involvement with Rosalind bothers her more than it should.

“Ghosts immediately ripple around me. The slope of his cheekbones is so familiar I could draw them with my eyes closed. He is taller than Jacob was. He is stunning.”

Balancing her inquiries between her struggling home life and her desperate affair with partner, Felix, Gemma finds more than she bargained for in Rosalind’s past, and more questions asked than answered. Was she the master manipulator Gemma believes, or an innocent victim of speculation and gossip?

“There was an alleged issue with a student at her previous school so there could be a pattern with the victim and younger men. She would’ve had interaction with the lead in the play and the backstage manager was said to have a crush on her.’”

Before the case is over, Gemma will have all her answers, and will discover the guilt she’s felt all these years is compounded, for at the heart of it all, she herself may be part of the reason Rosalind Ryan died.

“The thought of us being more alike than different scares me most of all.”

The Dark Lake is an intensely focused psychological drama, delving deeply into the mind of the investigating detective as she tries to sort through the life of a woman she alternately hated and envied.

Though the reader may have some sympathy for her, Gemma Woodstock isn’t a very likable character. From the very beginning of the novel, she’s a selfish treasure trove of guilt, beginning with her sweetheart’s suicide, and coming into the present with her affair with Felix. In the opening pages, she’s suffering a miscarriage of her partner’s child, and is relieved to not again face motherhood while at the same time yearning violently, desperately for her lover. Gemma faces a dichotomy of self—having to work a case with Felix, remaining impersonal in public while physically wanting him versus her long-lingering feelings about Rosalind and Jacob.

Told from Gemma’s point of view, revealing the inner working of her carried-over hate of Rosalind as it relates to the case and her life, the dénouement in the discovery of the killer will come as a complete surprise. Though most of the resolutions of her problems are taken out of her hands, in the end, Gemma still has many decisions to make. Whether she does so or not is left to the reader to decide.

The Dark Lake is a thrilling psychological police procedural as well as a leap into the mind of a woman engulfed in guilt.