The Divorce Papers: A Novel 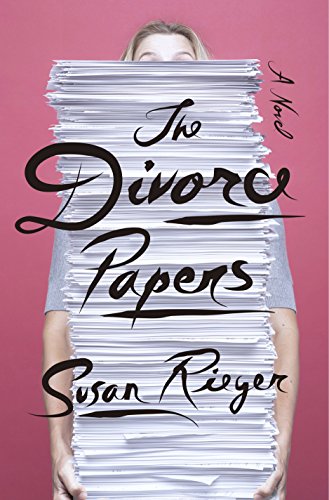 “The rest of the characters rarely rise beyond caricatures—they are sketched so briefly and incompletely that they become virtual non-entities.”

“Every divorcing family is unpleasant in its own way.”

As arguably prophetic as novel protagonist Sophie Diehl’s misquote of a line from Anna Karenina might be, only one family’s unpleasantness is revealed in Susan Rieger’s The Divorce Papers.

Mia Durkheim, the scion of one of her legal firm’s oldest and best clients, has been served divorce papers on behalf of her husband. Rather than wait for a more qualified attorney to be available to take down her information, she agrees to have her interview done by Sophie Diehl, a young, but rising star in the criminal law firmament. She’s taken by the brash younger woman and insists that she be allowed to pursue the case.

Sophie for her part is reluctant. Not only is her specialty most emphatically not divorce law (“I like that most of my clients are in jail” is her mantra), but her own parents’ contentious divorce has left her skittish about the entire process.

Still, the women strike up a good working relationship; Mia can be open with Sophie, and Sophie’s lack of experience in divorce law allows her to cut through standard protocols and see events with a fresh eye. Over the course of some 460 pages of letters, emails, legal documents, and interoffice memos, the divorcing Durkheims’ ups and downs are chronicled. Along the way, Sophie’s out of office life is also sketched out—her friends, family, and relationships.

Rieger’s experience in law definitely informs this epistolary style novel; in fact, it’s doubtful that one not familiar with divorce law could make the case interesting for anyone but the wealthy. Through Sophie’s education in the intricacies of those particular statutes, the reader is invited to learn a bit while marveling at the numbers involved ($6K a week in expenses? Yikes!).

Rieger does a nice job in the creation of the character Mia. Mia’s interviews with Sophie introduce a sharp-witted woman with a sense of humor, while her private notes and memos reveal a bit of bitterness and a definite temper.

Sophie is slightly less well drawn; though the sense of her as an intelligent young woman is there, the focus seems to be on her ditziness. This makes it hard to believe that she has done well in criminal law and definitely makes her ultimate success and pursuit by other firms questionable. The rest of the characters rarely rise beyond caricatures—they are sketched so briefly and incompletely that they become virtual non-entities.

The novel did have its funny moments, though none nearly as “witty and wonderful, sparkling and sophisticated” as promised on the cover. Smiles not chuckles are the order of the day with this one. This is fine, of course, but the reader should be aware that this novel is not a “romantic comedy” (another book jacket promise). Rather, it is an exploration of the legal details involved in a divorce. Unfortunately, there is not enough depth of character created, which hinders reader investment in the ultimate result of the case.

The biggest trouble lies in the framing of the story. While an epistolary style worked perfectly fine in an era when people believably carried on relationships long distance, through letters, it is not so believable today. The modern reader is likely to feel cheated by not learning much at all about the primary characters; it’s difficult to flesh out a human being in such a stilted style, especially when the bright moments are few and far between, interspersed with lists of expenses and income and dense legal decisions. When the characters do reveal more about themselves, it often rings false, i.e., “Would Sophie really write that down in an interoffice memo that will a permanent part of the case?” and “Why this much detail in an email? Don’t these people have phones?”

Rieger does a good job at keeping the plot moving (though the pages of legal decisions could be a stumbling block for a reader not familiar with legalese), and Mia’s story is wrapped up in a mostly satisfactory way.

Sophie’s denouement is slightly less believable, but within a fantasy realm of possibility. Still, for the right audience, i.e., well off (or interested in the lifestyles of the rich but not famous) and willing to wade through legal text, this could be an enjoyable read.