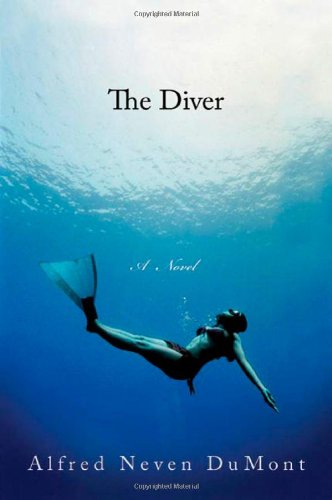 When a reader cracks open a novel, she or he enters into a bargain with the author.

For the reader, the terms of bargain are very simple: read the book with enthusiasm and an open mind.

For the author, the terms of the bargain are more formidable: create an interesting main character; develop a setting that is either sufficiently exotic to create allure or sufficiently familiar to create a sense of connection; introduce a defining challenge in the first few chapters; and finally, meld all of these elements into an engrossing narrative that holds the reader through to the end of the book.

But what happens when an author ignores her/his side of the contract? Can a novel still be successful?
Alfred DuMont‘s The Diver, challenges the reader-author bargain in the most fundamental ways. The main character in the first half of the book, the aged German patrician Albert, fades into the background halfway through the book, as the book explores Christie, the best friend of Albert’s deceased daughter, Gloria. The book’s setting, modern Germany, is neither familiar nor exotic to the American reader. Or perhaps DuMont is just not interested in “selling” his setting as either (though he shows much more interest in vividly painting the book’s later scenes in the Caribbean).

Most importantly, DuMont does not establish a defining tension as the centerpiece for the book. In the first third of the book, we learn that Albert is old, physically and mentally compromised, and somewhat disaffected from his son and the various women who take care of him. Of itself, this is not the basis for a satisfying book and some readers will not make it past page 80.

But somewhere after that, The Diver goes deeper. The narrative switches from Albert’s complaints to a revealing first person narrative of Christie’s difficult life and Gloria’s death. Characters who were previously little more than Albert’s caretakers become layered and interwoven. Even Albert changes, he becomes less doddering and cynical, and more engaged in the world him.

DuMont‘s voice also improves. While the early pages are bogged down by one-and-a-half-page paragraphs of Alfred’s dour philosophizing, the second half of the book is lit up by Christie’s quick paced narration of Gloria’s non-tragic death. Here especially, DuMont builds a warm and perceptive story, highlighted by sparkling, descriptive sentences like this one of Havana circa 1960:

“All around us the buzz of voices—bright, dark, loud, tender—cats meowing, dogs yapping, horses whinnying, music in all keys and rhythms, and the constant background noise of never-ending traffic, the honking of ancient cars, sputtering motorbikes, distant ships’ horns in the harbor, church bells, and the roar of landing airplanes sounding like they must be heading for our roof.”

The Diver is a book that disregards the long-established reader-author bargain: the main character is a bore who fades from prominence in the second half of the book, and the author does little to develop setting or a defining tension in the early chapters. (In fact, DuMont doesn’t even bother with chapters.)

But The Diver ultimately rewards the intrepid. In the world of post-modern fiction, the venerable reader-author contract is no longer sacrosanct. For readers who are willing to endure the early doldrums, The Diver takes readers on a very rewarding voyage.