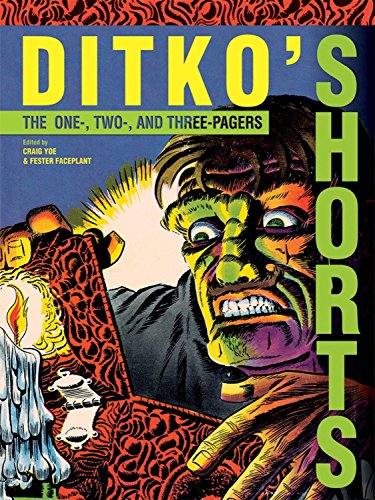 “There is tremendous beauty found in the obscure, forgotten, and lost corners of an artist’s attic. This collection is a peek into Ditko’s attic.”

There is something intangible, compelling, and slightly unusual inside the lines of Steve Ditko. It would be hard to describe the artist’s work as that of a realist, yet everything he draws is perfectly real. Long regarded as one of the greats in the history of comic books, Ditko’s line is totally individualistic and always engaging.

Featuring 38 stories each running from one page to three, Ditko’s Shorts by Steve Ditko documents some of the finest moments in the artist’s long and varied career. Almost all the work is a visual stunner. Even at the earliest stage of his career Ditko’s art strikes an incredibly detailed and individualistic tone.

Known to most as the co-creator of Spider-Man (with Stan Lee), Captain Atom (with Joe Gill), and Dr. Strange, Ditko’s career as a professional began in 1953.

In the comic market of the fifties an artist who wanted to work created art and stories for whatever company asked them to. Most of the work inside this collection comes from second-tier publishers such as Charlton and slips across an amazing mix of genres that includes westerns, romance, humor, horror, jungle, zombies, and science fiction

When possible the editors of this title have credited the original source and writer, but record keeping of the day was spotty at best. Especially when working within such filler pages as these. Still, even when he was working with a writer such as Joe Gill, it is often Mr. Ditko’s style that drives the story. As Stan Lee has often recounted, Ditko could take the simplest of outlines for a story and build a “. . . classic work of art.”

The book is filled with classic fifties-style trick endings that often create an “a-ha!” moment at the end of a story. Each one bringing a smile as the last panel surprises the reader. Much of this has to do with the way that Ditko knew what to leave in and what not to show.

Many of these stories could be thought of as the equivalent of comic book Haiku. Short, sweet pieces that get straight to the point with little in the way of extraneous input. One of the most complete three-page stories also has a great trick ending. Just when you think that the story “The Man Who Crashed Into Another Era” is over, Mr. Ditko adds a final panel that brings a third layer to the idea.

Another memorable, quick note happens at the end of the story “Free.” As fun as the ending is, these three pages also serve as a perfect example of how Ditko could use a comic page to subtly enhance the meaning of the story.

Opening the story with three standard panels that create a sense of claustrophobia, Ditko then opens up the center of the page with a panel that slips across the entire space left to right in such a way that it perfectly conveys the meaning of the title, “Free.”

At the bottom of the page he counters that wide expanse by drawing three more panels as claustrophobic as those at the top of the page. He repeats the pattern on the next page giving the two pages an eerie sense of balance as they sit side by side in this collection.

When the reader turns the page of the book Ditko inverts the formula by placing the largest panel across the bottom to reveal the twist at the end. “Free” has suddenly come to mean something it didn’t mean in the previous two large panels.

The pacing is so brilliant that unless you deliberately look for it, you have no idea what Ditko has done to add to the story. It is as if he is working on the reader’s subconscious.

He didn’t always work in an open manner. Many of his panels are as packed full of images and info as a comic panel can be. It didn’t matter if he was creating a western landscape, the past or the future, Ditko was always able to create a landscape that was perfect for the story.

In the opening panel for the first story “The Moment of Decision” he shows a spaceship having landed and an exploratory party moving forward while in the foreground a lone character has found a rich vein of titanium. The scene is packed, but despite the all the curves and the people and the wild landscape every image has a place and it all hangs together coherently.

The story is another example of perfect minimalism in comics. In panel two, one of the exploratory party stumbles across an alien. Panel three sees an amorphous alien literally duplicating the crew member. In panel four that poor crew member is seen pleading for admission to the leaving rocket ship while his numerous doppelgangers plead for the same. The story ends with panel five as the Captain of the ship recounts to the worried crew member exactly how he was able to determine which one of the duplicates was the original.

It is classic sci-fi with a bit of Sherlock Holmes deduction thrown in. All of it beautifully managed by one of comic’s greatest.

When it comes to human beings, few could draw panic and desperation as well as Ditko could. Anyone who has ever seen an early Spider-Man story knows that the artist could convey real emotion like few before or since. One of the finest examples of this is in the story “Will Power” where Ditko’s art brings poetry to the end of the story.

There is tremendous beauty found in the obscure, forgotten, and lost corners of an artist’s attic. This collection is a peek into Ditko’s attic.