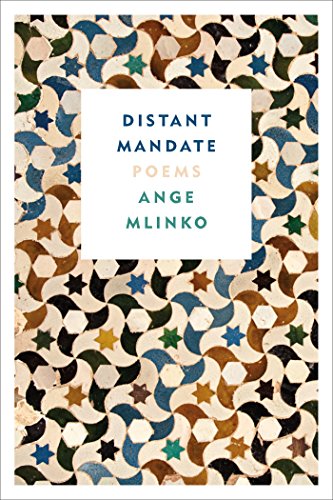 The poems in Ange Mlinko’s Distant Mandate take us through varying landscapes, weather, cultures; a child’s haircut, stage performances, museum exhibits, walks, drives and throughout, the end of a marriage. As with a conjurer though, the magic of the poems lie not so much in the material as in the depths of Mlinko’s artistic legerdemain: the range of her reference, the skill of her deployments.

Poetry, in these poems, unabashedly comprises an extra dimension, a mode of thinking and exploring. From “arch” to “ache,” from “hemlock” to “wedlock,” language’s complex felicities are goad and guide. The poems’ complex linguistic enactments—the closely stitched sound patterns (“earachy echo chamber’); the witty, often punning, coupling of words (“Aloe aloe     I mutely mock in French accent/the desert garden Yves Saint Laurent”); the way the winding sytax is draped over the mostly rhymed lines;  the multiple levels of deftness the rhyming displays (“exist/tryst”; “masterpiece/gleam of grease”; “getaway/Padre”); the range of tonalities, from jaunty (“the windup radio’s/right-wing warm-ups”) to reflective (“Gold is formed in the split second/of a supernova, oil over eons,/ love in the window of an hour”)—syllable by syllable, these lyric tools, poetry’s technologies, calibrate the intensity of our engagement.

A taste of Mlinko’s aesthetic stance can be had in these lines from “Epic,” an homage to James Merrill and the book’s longest poem:

start to take on aspects of a universal

from arabesque and pentacle

and hexagon of course (the aleph

of this hivemind) 3-D airBnBs.

Erudite wittiness can sometimes read like frippery—until it doesn’t; au courant images—“3-D airBnBs”—balance out classical references—here Moorish architecture—to bring the poems if not down to earth then at least to an altitude redolent of the present day. Medevac copters “periodically drown out” dialogue from an outdoor production of Hamlet; Cythera’s flowers are tattooed.

Even aside from the two overt homages, “Epic,” which reverberates off Merrill’s “From the Cupola.” and “Days of 1999,” with its title that references Merrill’s “Days of . . .” poems (which take their titles in homage to Cavafy’s “Days of  . . .” poems), Mlinko’s cultural preoccupations, her straddling of worlds, suppleness of tone, wit, ornately intricate and sometimes decorative poetic palate are all distinctly Merrill-esque.

To pull this off is no small feat, and to do it in a way that seems, in fact, natural—rightfully hers—an even greater one. At times though, as with Merrill, one wants the fluency to slow down so that one can catch one’s breath; the strobe-light dazzle of densely patterned sounds, puns, associations and morphing meanings can make one dizzy, claustrophobic—in need of air.

Mostly, though, Mlinko’s virtuosity illuminates. Among the chief pleasures of reading her work is, paradoxically, the leisurely way images and ideas develop. If one sometimes feel hustled by the pace of the language, one also feels gratified and surprised by how far, and where, she takes a metaphor, a simile, a conceit, and how she rings the resonances.

As “Milkweed” recounts following “the arc of the monarch” by car, it also follows an emotional arc, and the two are entwined, even as a marriage seems about to unravel. This is the fourth of six stanzas:

Magnets in the antennae help orient

but espoused to minuscule lodestones.

Mine gravitate to bittersweet zones

driven by memories, not instinct.

Driving through the heartland of sad songs

builds a contract stronger than the one we inked.

The poem’s end coincides with the end of the journey and arrival back home. The last stanza contains three cessations: the wind’s, that of “the tatterdemalion in the grass,” and “the cessation of ache,” which the planting of milkweed (the monarch’s food) prepares the way for. The complex intermixing of Monarch butterfly imagery, the car trip, marriage and the speaker’s inner feeling is both wrought and organic, and throughout the book that alloy is Mlinko’s great strength.

Carol Moldaw is an award-winning author of a novel and five books of poetry. She is also a recipient of a Pushcart Prize and a NEA Writing Fellowship. Her new book of poems, Beauty Refracted, will be out in 2018.