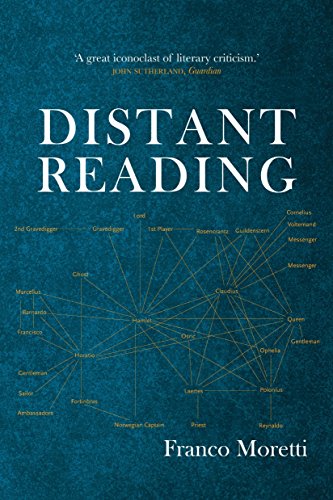 In the opening essay of Distant Reading, Franco Moretti advances the provocative question, “Would there be Shakespeare, had England not been an island?”

His answer: “Who knows? But that the greatest novelties of tragic form should arise away from the mainland . . . is quite a sign of what European literature had to gain from losing its unity, and forgetting its past.”

He suggests that the very separation of England from Europe largely contributed to what emerged from a Europe characterized by “the constitutive dis-union of its cultural scene . . . And this means that Europe doesn’t simply offer ‘more’ space than any nation state, but especially a different space: discontinuous, fractured, the European space functions as sort of archipelago of (national) sub-spaces, each of them specializing in one formal variation.”

Extending his geographical perspective concerning modern European literature, Dr. Moretti observes, “the European space is not a landscape, not a backdrop of history, but a component of it; always important, always decisive, it suggests that literary forms change ‘in’ time, no doubt, but not really, because of time.”

He goes on to suggest that spatial relationships are crucial to literary production, for “a form needs time in order to reproduce itself; but in order to arise it is space that it needs most. Space, spaces, plural, of neighboring, rival cultures; where the exploration of formal possibilities may be allowed, and in fact encouraged as a sort of patriotic duty. Once more; a space of a divided Europe.”

Addressing the thrust of his work, he asserts the importance of going beyond the plentiful local and national literatures to explore world literature, because “after all, the literature around us is now unmistakably a planetary system. The question is not only what we should do, the question is how. What does it mean, study in world literature? How do we do it?”

This is a daunting undertaking for “we are talking of hundreds of languages and literatures here. Reading ‘more’ seems hardly to be the solution. Especially because we just started rediscovering what Margaret Cohen calls the ‘great unread’. . . there are 30,000 19th century British novels out there, 40, 50, 60,000—no one really knows, no one has read them, no one ever will. And then there are French novels, Chinese, Argentinean, American. . . .

“Reading ‘more’ is always a good thing, but not the solution.” Taking inspiration from Max Weber’s writing of “the conceptual and their connection of problems which define the scope of the various sciences,” the author proclaims, “World literature is not an object, it’s a problem and a problem that asks for a new critical method; and no one has ever found a method by just reading more texts. That’s now how theories come into being. They need a leap, a wager—a hypothesis, to get started.”

The study of literature has long been dominated, really monopolized by close reading. Dr. Moretti advocates by viewing literature from a distant perspective he argues one can see what cannot be seen close up.

Dr. Moretti readily acknowledges that his theory may not be well received in the United States, a place “of close reading…the trouble with a close reading . . . is that it necessarily depends on an extremely small cannon.” He asserts, provocatively yet accurately, that close reading is not the path to comprehending world literature, for “at bottom, it’s a theological exercise—a very solemn treatment of a very few texts taken very seriously—whereas what we really need is a little pact with the devil: we know how to read text, now let’s learn how not to read them. Distant reading: where distance, let me repeat is a condition of knowledge: allows you to focus on units that are much smaller or much larger than the text: devices, themes, tropes—or genres and systems.”

Putting this in context, he frontally addresses the fundamental problem for “knowing 200 novels is already difficult. 20,000? How can we do it? What does ‘knowledge’ mean in this new scenario? One thing for sure: it cannot mean the very close reading of very texts—secularized theology (really) canon!—that has radiated from the cheerful town of New Haven over the whole field of literary studies. And larger literary history requires other skills: sampling, statistics, work with series, titles, concordances . . . and perhaps also the ‘trees’ I discuss in this essay.”

Distant Reading both explores the implications of the vastness of literature through analytics concerning the patterns of the length of novel titles as well as numbers of novels published per year over extended time horizons. Applying the same perspective to Hollywood films, Dr. Moretti discovers that over the 1986–95 decade, the prevalence of action films amongst the top five box-office hits varied dramatically, from about 15% in Australia and 27% each in Norway and Switzerland, to 80% each in Jamaica and Malaysia, and 67% each in Taiwan and Thailand.

By contrast, comedy, were not featured in any of the top five box-office hits in Serbia, Malaysia, Taiwan, and Chile, while being popular in Czech Republic 30%; Hungary, 29%, and Austria and Israel at 27% each.

Dr. Moretti’s work reflects the confluence of cultural inquiry and big data. He observes, “Intuition is a good thing, but concepts are better,” then proceeds to state that applications of network theory, more specifically employment of big data analytics, are even better still.

With “digital databases and automated data retrieval . . . today, we can replicate in a few minutes investigations of months and years of work.”

Employing analytic techniques and social sciences in graphing, mapping, and charting the directions, emphasis, and meaning of words collected in the form of novels, Distant Reading is the literary discipline’s version of disruptive innovation. Dr. Moretti proclaims that since there is far too much to read, we must change the way we read, which he models through a big-data equivalent to evaluating fiction.