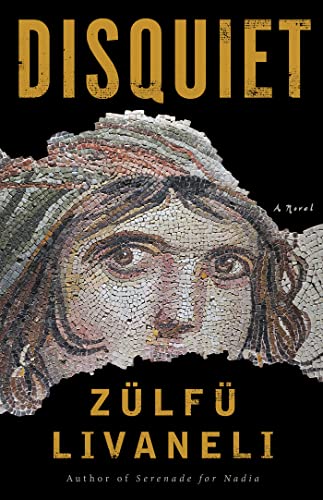 Disquiet by Zulfu Livaneli, Turkey’s bestselling author as well as noted political advocate, is a short but powerful novel that might well be described as a political treatise wrapped in a parable.

The story takes place in the modern Middle East and its plot is quite simple. The narrator is a journalist whose friend, Hussein, a kindly and respected young man devoted to helping Syrian refugees has been murdered in Germany, having fled the Syrian border town of Mardin because of his forbidden love for a Yezedi woman, Meleknaz, who has been tortured along with many others by ISIS in Syria but has miraculously escaped the abuse and made her way with others to a refugee camp, having given birth to a blind baby during an arduous mountain crossing.

Hussein and Meleknaz’s love has been condemned by Hussein’s Muslim family because she is a Yezedi, therefore thought to worship Satan and is thus a devil. Frightened away from Hussein, she flees his home.Hussein is beaten for his transgression by community members, and his family sends him to Germany where two brothers work, with the promise that they will help get Meleknaz and the baby to Germany to reunite with him.

It never happens, but Ibrahim, the journalist, is increasingly driven to find out what happened to Meleknaz and her baby. It becomes an obsession and leads to an archetypal pilgrimage to find her.

None of this exposition ruins the gripping 160-page novel because the purpose of the book is to use the story form to expose horrific tragedies in the region, mainly perpetrated by ISIS, but also augmented by conservative cultural and religious beliefs and practices, as well as human foibles, failures, isolation, and pain. Thus, the book becomes a philosophical treatise about everything that plagues the world, both East and West. Ibrahim, it could be said, is Livanel’s alter ego, endlessly driven to process all that is achingly real in the modern world.

Full of torture stories, a cameo by Angelina Jolie representing the United Nations, and ruminations about the rich while the poor suffer, the author’s reflections are shared with readers through Ibrahim’s sleepless nights of mental anguish as he searches for truth and Meleknaz.

Throughout the story Hussein’s dying words serve as a simple but eloquent reminder of failed humanity: “I was a human being.” Yet the story reminds us of love and the human capacity for compassion. It is a meditation on the state of being, the challenges of living, the quest for truth and beauty.

Lying in his bed one night Ibrahim thinks, “Our species has no right to live in this world, destroying the world and each other. . . . There is a monster in each of us. . . . Seeing ourselves as superior to plants and animals is an illusion. How base it is of us to exalt humanity.”

Yet he goes on searching for Meleknaz, desperate to help her and her baby, almost as if he has become Hussein. In that act alone, we recognize that life goes on and more importantly, that humanity just might prevail.