The Disordered Mind: What Unusual Brains Tell Us About Ourselves 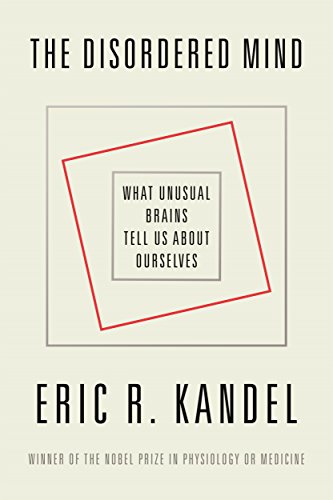 An authoritative tour of the brain. Groundbreaking research into how the brain processes information.

Have you ever wondered how a typical brain functions and what happens when its normal activity goes awry? Eric Kandel “explores how the processes of the brain that give rise to our mind can become disordered, resulting in the devastating diseases that haunt humankind . . .”

The book is divided into eleven chapters, each describing a disorder, its historical background, biological basis, regions of the brain that are affected, genetic components, what it teaches us, available treatments and what to expect in the future. Illustrations throughout the book add an important dimension to understanding the written concepts. Patients’ true accounts are inserted in every chapter. Kandel's aim is to demonstrate the relationship between cognitive psychology and brain science. After reading the book, you will see that his aim is fulfilled.

The first chapter is a general overview. The author’s main hypothesis is that we lose our sense of self when our brain ceases to function properly. In addition, studying atypical brains gives us a better understanding of normal ones. He makes a good case for proving this theory by looking at autism, schizophrenia, bipolar, dementia, Parkinson’s and Huntington's diseases, post-traumatic stress disorder (PTSD), mental illness and creativity, sexual orientation, addiction, and consciousness. “Today, as never before, the study of brain disorders is giving us new insights into how our mind normally functions.”

Until around 1800, disorders of the mind were considered to be based on neurological reasons only and not due to thoughts or feelings. Since then, scientific advances such as brain imaging have demonstrated that brain illnesses may also be due to mental processes and emotions.

The second chapter deals with the autism spectrum. Questions to consider are: “How does the mind work? What does it mean to say the mind is created by the brain?” Kandel looked to pathology to find the answers, especially in autistic children.

In the 1960s, cognitive psychologists believed that this disorder was due to cold and unaffectionate parenting. However, research by neuroscientists is showing that autism has a biological basis. We now have the tools to learn how “genetic predisposition interacts with environmental factors to give rise to specific disorders.” The study of autism teaches us about the social brain and its ability to decipher mental and emotional states. Although mostly readable, this chapter becomes technical in its detailed description of neuronal activity in the brain.

The third chapter considers the role emotion plays in our everyday lives by examining the characteristics of depression and bipolar disorder. It explores the relationship between studies of brain disorders and the healthy emotional brain. Kandel embellishes the chapter with patients' accounts of how stress can lead to depression by setting off biochemical changes in the body.

Treatment consists of anti-depressant drugs, lithium for those with bipolar illness, and deep brain stimulation techniques along with psychotherapy. But the key scientific discovery is that these disorders are due to disruptions in the brain’s neural circuits and not primarily to environmental factors. In the future, a deeper understanding of the genetics of these illnesses will lead to better treatments and a better understanding of the self.

Schizophrenia is the topic of chapter four. It is believed that it begins before birth, but its symptoms are not apparent until early childhood or late adolescence. This debilitating disorder has wide-ranging effects on the brain and behavior—“what circuits it disrupts in the brain, what treatments are available to patients, and what genetic and developmental components underlie this disorder.” Anti-psychotic drugs and psychotherapy can allow many schizophrenics to lead a normal life.

. . . "the studies of autism, depression, bipolar disorder and schizophrenia-and the brain functions they affect-have yielded profound insights into the nature of our mind and our sense of self."

Alzheimer's, on the other hand, is characterized by cell death. Can we prevent the onset of dementia? Since the hypothesis is that its cause is amyloid clumping, researchers are focused on using antibodies to clear these brain clumps.

Chapter six explores what brain disorders tell us about our creative potential. Creativity originates in the brain and has a biological basis: "the capability for creativity is universal. Each of us, in various ways and with varying degrees of skill, expresses it."

A key question is: how is creativity unleashed in the mentally ill? One theory is that creativity entails the lifting of our inhibitions. It frees up the creative potential of the right hemisphere. (Oliver Sacks’ book, The Mind's Eye, is a testament to the brain's power of creativity and adaptation.)

Psychotics are free from conventional reason. Schizophrenics express their unconscious conflicts and desires, unfettered by social conventions. Surrealism and Dadaism were influenced by psychotic art in the sense that they unlocked the power of imagination.

In conclusion, what we have learned from the art of brain disordered individuals is "the central role of unconscious mental processes in creativity." Autistic people "cast new light on the nature of talent and creative problem-solving. Alzheimer's disease and frontotemporal dementia reveal the plasticity of our brain." (Norman Doidge elaborates his theory of plasticity of the brain in his book: The Brain That Changes Itself).

Disorders of movement are treated in the next chapter, such as Parkinson's and Huntington's diseases. These disorders are traced to specific neural circuits in the brain. The motor system has extraordinary skills but when something goes wrong, it leads to unusual behavior or loss of control over movement.

At present, there are no drugs to slow this brain degeneration, but deep brain stimulation may give some relief. Future research in genetics and molecular mechanisms in the brain may reverse the process. By studying these spinal disorders, we learn about the connection between thought and action. This chapter is for those who have a background in the anatomy and physiology of the brain.

Our emotions play a major role in everyday life. But anxiety, post traumatic stress, and faulty decision-making can wreak havoc on them. In chapter 8, Kandel describes how these conditions can pose difficulties in moral decisions and possible causes of psychopathic behavior. What these disorders have in common is how the brain functions when they are manifested. Psychopaths have abnormalities in several areas of the brain. Scientists are now looking for biological and genetic markers in view of possible treatment.

Even addiction is considered a chronic disease. Research has shown that the brain of an addicted person is disrupted. The best treatment so far is behavior modification. "Given that the risk of addiction is strongly shaped by genetics, it's important that we approach addiction as a brain disorder . . ."

The prevalent belief until recently was that social environment had a major effect on gender identity and sexual orientation. However, scientists have discovered that there are sex-specific structural and molecular differences in several areas of the brain and that gender identity has a biological basis. Gender is decided even before birth, and young children know that they are in the wrong body. A better understanding of the role of the brain might lessen the stigma that children and adults have been suffering from.

The last chapter explores consciousness as the great mystery of the brain, beginning with Freud and psychoanalysis. The modern view is that certain areas of the brain are involved in conscious and unconscious behavior. But these two theories can be combined with modern biological insights into social behavior and aggression into a synthesis of the new biology of mind and psychoanalysis.

This book is a handy reference tool for giving brief resumes of important and common mental disorders. It is recommended for both experts and persons who already have some basic knowledge of the topic.