The Discovery: A Novel 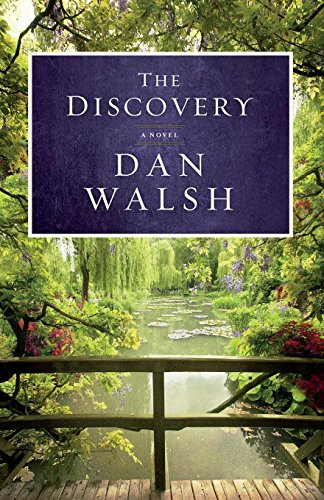 “The Discovery is a masterful bit of storytelling. It is, above all else, a love story for the ages, one of sacrifice and devotion that will leave readers with a renewed passion for their loved ones. As I neared the end of the book I let out a huge sigh and experienced a wonderful sense of wellbeing and happiness. Dan Walsh did it again: He touched my heart.”

The Discovery is a story certain to please masses of readers since it embraces so many genres. Anyone yearning for mystery, suspense, and thrills will be more than accommodated, as will those who love going back in time, in this instance, to World War II. But if you are truly a Dan Walsh fan, you know his forte is romance—from a Christian perspective. Yes, men can write love stories that will bring you to tears.

The Discovery is an immensely enjoyable read. Mr. Walsh fashions two stories that come together perfectly to form a satisfying conclusion. The story centers on Gerard Warner, a hugely successful novelist, who dies and leaves his Charleston estate to his grandchildren. One of them, Michael, longs to follow in his grandfather’s footsteps by becoming a writer. His grandfather was well aware of Michael’s talent and planted certain clues in the mansion he left to Michael and his wife, Jenn.

After Michael takes possession of the property, he begins to find pieces of the puzzle that had been confusing the Warner family for years. An old unpublished manuscript unlocks the door to a vault filled with revelations no one could have imagined.

Gerard Warner’s grandson embarks on a guided tour, compliments of his loving enigmatic Grandpa, of a wartime Daytona Beach ramping up to support the war effort. The novel is rife with tales of Nazi saboteurs, U-boats, and a nation struggling to supply its fighting men with equipment and munitions.

Spies are chased by J. Edgar Hoover-era FBI agents, complete with dark suits, white shirts, fedoras, and bland monochromatic ties. The author is insightful as he gives the reader an idea as to why the Bureau sometimes acted as it did. Many times the FBI refused to disclose the true nature of events for several reasons, not the least of which was national security. But at that stage in both our nation’s history and that of the Bureau, Mr. Hoover recognized that building a formidable reputation, one that might cause anyone to fear his agents, was a smart strategy to pursue. Today’s FBI hardly resembles the agency Mr. Hoover built and has checks and balances J. Edgar could never have imagined.

As usual, Mr. Walsh did his homework and researched the venues and historical facts relating to German spy activity and U-boat incursions via our nation’s coastline. His description of the Nazi spies, some of whom were able to blend into our society, is well done. The references to Hitler and how the sadistic ruler slowly destroyed the fabric of German society, adds authenticity and emotion to the ongoing action. In addition, the Abwehr, the German military intelligence agency, plays a prominent role in the espionage story that will have readers unwilling to set the book down.

The Discovery is a masterful bit of storytelling. It is, above all else, a love story for the ages, one of sacrifice and devotion that will leave readers with a renewed passion for their loved ones. As I neared the end of the book I let out a huge sigh and experienced a wonderful sense of wellbeing and happiness. Dan Walsh did it again: He touched my heart.