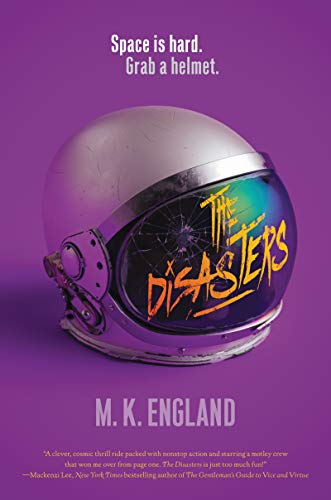 Billed as “The Breakfast Club meets Guardians of the Galaxy,” The Disasters features Nax, an Ellis Station Academy washout. Joined by a ragtag group of other teen failures, the group must stop the Earth First movement from wiping out Earth’s colonies—all while being pursued across the galaxy as fugitives for the mass murder of a space station. Nax and his accidental crew are innocent, of course, but they’re the only witnesses to Earth First’s atrocities, and the only ones who can stop the next genocide.

At its heart, The Disasters is a coming of age book across a diverse group of individuals. It’s also a tale of found family and courage, and a young man’s insecurities. Nax’s desire to leave Earth for the colonies comes not just from his intense love of flying, but as an escape—from his family, his pastoral work, and the memory of nearly killing his brother in flying accident gone wrong.

The first half of the book is well paced and sets up numerous intriguing questions. Nax, the lead character, is a well-loved trope in terms of being a messy hotshot pilot with family issues, and it is easy to sink into his point of view. His age gives his character some distinction, and it is enjoyable to watch the struggles of an essentially “young Han Solo” type of character.

The Earth First terrorists are similarly clichéd, but an addition of the group leader’s stepdaughter on Nax’s ship gives Earth First some distinction. Her inclusion with the reject crew fills out an otherwise worn-over cast of personalities: the genius, the medic, the good-looking jokester, and then the addition of the “rebel stepdaughter.”

Unfortunately, the secondary characters show immense potential for three-dimensionality in the first half of the book, but fall to flatness almost exactly at the halfway point. By the end of the book the similarities in voice are so problematic that Nax emerges as the only distinct character. He is also the only character the shows anything resembling a growth arc, although Case (the genius) makes reasonable strides in that direction with her evolution from letter-of-the-law, we’re innocent so everyone should believe us, into signing on with the Swift Kick at the end of the book to stay with the crew.

While the book begins on a strong premise, the most intriguing question of all—why is this group of clearly very capable students discharged from the academy—is never answered. It is this question that really hooks the narrative, and so it was disappointing when this promise was not kept. The book even goes as far as to have the Academy records delivered to all of the outcast students in the final chapter, yet the reader sees none of the contents. Without that information the premise of the book falls flatter, as what appears to be a set-up for a trope subversion simply becomes an unfulfilled promise.

The stolen ship and its modification, the crew cohesion, and the intergalactic politics do shine through in the back half of the book. The flatness of the characters bogs down the pacing, however, and with the medium-thin worldbuilding, the lack of character richness really stands out. The narrative rests too heavily on tropes to work with later plot developments. The Disasters has the making of a fluffy, feel-good, lighthearted and deliciously diverse teen space opera, but falls between the cracks of worldbuilding, character building, and pacing.

In contrast, Nax’s voice is singular and emphatic, and it is a delight to share in his triumph and struggles. He is most robust when describing ships:

"She’s a gorgeous piece of work. All long lines and sleek rounded wings and powerful engines that are nearly boner inspiring."

or interacting with various love interests:

"Oh. Interesting. I clear my throat and work to keep my voice casual. “Latent homoeroticism is the backbone of the British educational system, is it?”

“A long-standing public school tradition. Some of us take it more seriously than others,” he says, and tosses me a wink.

While the other crewmembers seem to have relatively minor infractions, Nax is truly a “disaster” worthy of the book title. His journey will resonate with many young readers, as will his awe of new planets and his freedom in piloting a stolen luxury ship (heavily modded, of course). His self-imposed exile and eventual reunification with his brother and parents is satisfying and joyful, making Nax’s victory over the Earth First terrorists in a stolen ship with a motley crew of teenaged misfits that much more delightful.

Finally, The Disasters commitment to diversity—through numerous ethnicities, cultures, genders, and sexualities, is a strong selling point and handled intuitively. The inclusion of characters in hijab, the use of numerous non-European languages, as well as a trans woman (the medic—kicked out of the Academy because her government issued ID card gender didn’t match her paperwork) added depth at surprising times. The crew showcase incredible cohesiveness and understanding, making it impossible to not want to settle in with them and join in on the adventure. For young readers, especially those unfamiliar with common space opera tropes, The Disasters will be a delightful space romp of high stakes adventure paired with a resourceful, hotshot pilot trying to save the galaxy and connect with his family. He just might get to kiss someone, too.