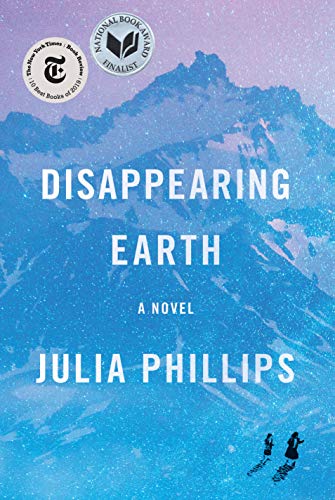 “Phillips’ novel invites us to step into this community and the lives of these characters as if we were visitors to a foreign land.”

Disappearing Earth is like walking through museum. Each room is filled with a diorama. Each diorama represents a character and a part of the story. It is only by traveling through each room that the reader gets the full picture.

Every chapter represents a month in the investigation. The point of view shifts from woman to woman, from white to native, from small town to big city. A complete short story embedded in the larger narrative.

The novel starts with the victims. “The water receded. Alyona could see, under her sister’s feet, the pebbles breaking the curves of Sophia’s arches, the sweep of grit left by little waves.”

Two young girls, on their own at a beach in August, the isolated and often wild Kamchatka Peninsula a startling place for a mystery.

Once the girls disappear, the novel splinters, just as any family—any community—does, when awful things happen to children.

Chapter two, or rather September, begins “Olya came home to an apartment that smelled the way it always did when her mother was gone: a little sweet, a little rotten.”

Olya is a teenage girl. Older than the two that disappeared, and struggling with the curfew, the everpresent posters of the missing girls, the constant focus by the adults around her that the world isn’t as safe today as it was yesterday.

Her small, personal tragedy, her best friend rejects her for other girls, unfolds against the backdrop of the original crime. Olya’s short story hinges on the shared location of the place where the girls disappeared.

The chapter culminates with a discovery by Olya. “How good Olya would feel to keep this secret. How safe it was inside herself.”

Her secret is a new layer to understanding not the story of the missing girls, but a personal revelation. Experienced through a separate vignette whose inciting incident is the original crime.

With a complete beginning, middle, and end to each chapter, the characters sometimes disappear just as the girls did in August. Other times, they resurface, but in a new situation, a new dynamic.

All of Kamchatka is touched by the process. The police who investigate. The witnesses. The mother. Gliding from room to room, we experience the totality of the situation.

Unlike a conventional mystery, where the reader follows the sleuth or the victim or the killer, Phillips chooses to touch on all the disparate threads, only bringing them together at the end.

Throughout the puzzle of the girls’ disappearance, Phillips tackles complicated cultural questions, which resonate in any country, not just this tiny part of Russia.

The distrust of migrants. The simultaneous rejection and appropriation of the customs of the indigenous peoples. The battle between the older generation and the new.

A travel writer with an impressive resume, Phillips lived on the Kamchatka Peninsula for two years, and her love for the land shines through her characters’ relationships with the places they inhabit.

“Charred wood, rich sulfur, and cold earth: the smells of nostalgia. Her family had loved this place.” Katya escapes from her daily life to go camping with a new lover, a man she’s not sure she should date.

But, when they are together, “Katya wasn’t thinking of God. She forgot lost children. She was thinking of Max, his arms, his fingers, his mouth, his fine teeth, the urgency under her skin.”

He is her calm in a time of upheaval. They may not represent a lifelong love, but they do represent two people doing the best they can in this moment.

Character after character does the same, facing their own personal battles while the community struggles to find a resolution to the kidnapping.

Sometimes the stories are individual, like a woman’s search for her missing pet. “Bottles, hubcaps, and first-floor windows turned into spots of white that could be, but never were, Oksana’s dog.”

Other chapters resonate on a larger scale, as with the position of the indigenous peoples in the community. “He was onto something else, deep common knowledge, an ache that was native.”

The novel ends with a resolution of sorts. A return to something we weren’t sure we’d see again.

Phillips’ novel invites us to step into this community and the lives of these characters as if we were visitors to a foreign land. As our guide, she shows us where to look, but leaves it up to us to decide what’s important to remember from our visit after we return home.