The Disappearance of Josef Mengele: A Novel 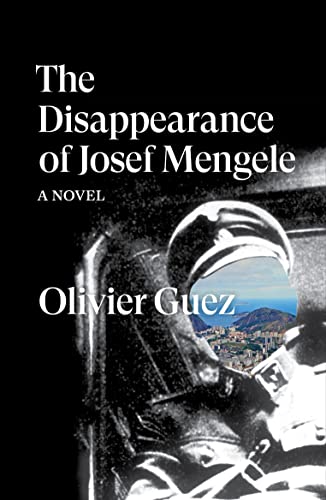 “Based upon eyewitness accounts, journal entries, interviews, letters, and journals, this is an outstanding record of the activities and events in the life of Josef Mengele as a notorious fugitive.”

“From all ill dreams defend our sight, from fears and terrors of the night. And keep us on guard. Be wary, man is a malleable creature, we must be wary of men.” —Goethe

This is the story of Josef Mengele’s three decades on the run and his decline into madness. In this well-researched novel, the Auschwitz “Angel of Death,” escapes to South America, but lives in constant fear of being recognized or captured. It is the macabre journey of the infamous Nazi doctor, who escaped from an American camp after the war and disappeared into the South American jungles as a fugitive, thanks in part to family money, reliable childhood friends, and helpful new Nazi associates in South America.

During the Holocaust, Mengele, a captain in the notorious Nazi SS, is a main perpetrator of deceit, murder, torture, and death. He is a notorious war criminal who performs medical experiments on twins and oversees the murder of untold thousands of Jews. Mengele promises Hitler a new genetic method to produce millions of Aryan twins, extending the power of Germany into a Fourth Reich guaranteed to dominate the world for centuries.

Jews are his experimental material. Mengele operates on prisoners without the use of anesthesia. He tortures thousands of Jews, simply to see how they react to having dangerous materials injected, or to see how long they might live with internal organs removed. He has a special interest in pregnant women, preying upon their unborn fetus, then murdering both.

Mengele stands upon the Auschwitz entrance ramps, gathering up Jewish twins to experiment upon. A zoo of children is at his disposal, including dwarfs, giants, cripples, and especially twins. Mengele delivers a daily symphony of cutting, bleeding, injecting, and performing autopsies upon his victims, many of whom are still alive when he begins the autopsy. Jews are Mengele’s guinea pigs, to be used, tortured, murdered and discarded at his pleasure. He castrates men, removes women’s ovaries, and irradiates both. His office wall in Auschwitz was covered with the eyes of Jews pinned to it, like so many butterflies longing for freedom.

“Pity is a form of weakness,” says Mengele. On the ramp where Jews are selected by him for life or death, he whistles Tosca and smiles incessantly. With a slight movement of his switch, Mengele, the all-powerful, sends Jewish prisoners to the left, for instant death in a gas chamber, or to the right, for forced labor and medical experimentation.

The genetic engineer of the Aryan race is a profound narcissist. Of all that he can think, say or do, he considers himself meticulously perfect. When joining the SS, he refuses to be tattooed, like everyone else. In his mind, it can only mar his perfect body. Captured later by Americans at the war’s end, the missing tattoo helps him escape.

Mengele discovers a safe haven in Argentina, where he lives among other former Nazi military and political officials. The dictator of Argentina, Juan Peron, finds reason to praise the “Angel of Death” from Auschwitz. For years, Argentina is a sympathetic home for Nazis. Mengele builds a business and a home in Buenos Aires, using the name, “Helmut Gregor,” and gains respect from his fellow Nazi comrades in exile. Gregor is handsome, well-dressed and has a good reputation in the German community of Buenos Aires. There, he is introduced to Adolf Eichmann, who uses the pseudonym, Ricardo Klement. Eichmann has little use for the Auschwitz Angel of Death. Mengele despises him.

Argentina slips into civil war and Peron resigns. The Nazis are uneasy as their protector has fled. Eichmann is captured by Israel’s secret service, the Mossad. They take him to Jerusalem for the show trial of the century. Mengele now fears that the Mossad is lurking behind every tree, waiting to capture him. He takes a huge risk and returns to Europe under his alias. There he is introduced to his son as a long-lost uncle.

The world gradually learns about the Nazi genocide against the Jews of Europe, through books, documentaries, films, Claude Lanzmann’s Shoah, the television mini-series Holocaust, and later, The Boys from Brazil, in which Gregory Peck plays a dentist whose character is overtly Mengele. Nazis are exposed for the devils they have been. Mengele is spotted twice in rural Argentina, but escapes both attempts to capture him. He so fears being caught that he flees to Paraguay, where he melts into the dense jungle and, for a decade, disappears from sight, living on a farm with a family who is secretly supported by the Mengele family’s wealth.

The years pass and Mengele slips gradually into paranoia and dementia. He fears being captured constantly. His personality grates upon the family he lives with, as he tries to control every decision they make. They soon grow to hate him. Eventually, they force him to leave. Mengele moves to Brazil. Soon after, Franz Stangl, former commandant of the Sobibor and Treblinka death camps, is arrested in Brazil and swiftly extradited to West Germany. Mengele is consumed by fear.

In the 1970s, Mengele persuades his son, Rolf, to come to Brazil, where they soon argue. Rolf inquires about the truth of his father’s Nazi SS years. The old Nazi yells at his son, defending his years torturing and murdering Jews at Auschwitz. “I did nothing wrong,” Mengele yells to his son. Rolf sees his father as stubborn, incurable, and evil. Rolf asks what the Jews did to him that they deserved such a terrible fate. Do you have no remorse, he asks? Mengele replies with a nasty look saying, “the Jews deserved no mercy, because they did not belong to the human race.” The visit disintegrates into hatred and is over in two days. Rolf walks away from the madman his father has become.

Everyone Mengele lives with in South America soon hates him. Thirty years after the Holocaust, Mengele continues to believe that he performed a valuable service to the world by exterminating Jews. “They are not human beings,” he repeats. He suffers no pangs of guilt for torturing women and children. Whatever charm he once possessed has fled, revealing the neurotic carcass of an old, feeble Nazi, whose blind hatred, paranoia, and narcissism has made him unbearable to others.

Olivier Guez pours everything into this page-turning novel. The reader is compelled to go on and on. Georgia de Chamberet provides excellent translation into English.

Based upon eyewitness accounts, journal entries, interviews, letters, and journals, this is an outstanding record of the activities and events in the life of Josef Mengele as a notorious fugitive. The writing is fluid, smooth and concise. This examination of history is not very kind to the famous Nazi hunter Simon Wiesenthal, who always seems a day late and a dollar short on Mengele’s location and comrades. It also suggests that Mossad was somewhat inept in searching for Mengele, which may or may not be a valid assumption.

As this is a novel, rather than nonfiction, the author is free to be creative. Guez writes with intensity and passion, but he’s always under control. It’s an evocative, evolving story in which the reader is compelled to continue, driven on by the desire to see justice delivered to this monster, as it was for Eichmann.