The Direction of War: Contemporary Strategy in Historical Perspective 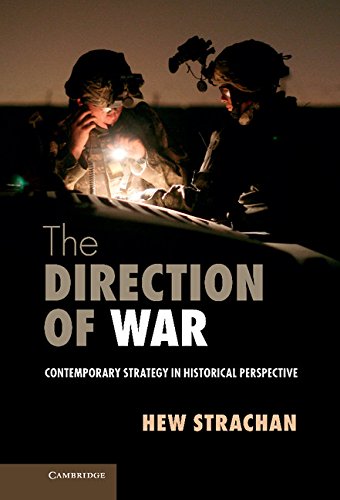 “. . . understanding what has not changed about warfare in the 21st century is at least as important as understanding those minor means of waging war that are in constant flux.”

A note of caution up front: This book is definitely not for beginner students of military history or strategic studies. It is extremely well written, but is written for the graduate level military history practitioner, senior military leader, or policy maker that has an extensive background in military history and strategic thinking. If the reader has not studied Clausewitz, Mahan, Corbett, Douhet, and Liddell-Hart, among others, then many of the ideas discussed in these essays will not have as much impact.

Sir Hew is the Chichele Professor of the History of War at the University of Oxford and a Fellow of All Souls College. In addition to his academic background, which mostly focuses on the First World War, he provides additional insight in the book from his work as an advisor to Britain’s Defence Staff and as an instructor at various military academies and war colleges in both American and England.

This volume is a collection of essays on various aspects of strategy, strategic thought, and history, based on either lectures or articles previously given by Sir Hew. These essays have been extensively updated and are very tightly integrated to support his thesis that modern Western strategic thought, especially in the United States and Britain, have not produced satisfactory results in the current conflicts in Iraq and Afghanistan.

This crisis of understanding war’s nature and utility has created, according to Sir Hew, a need to examine the historical roots of strategy to determine how best to meet the challenges of the next century.

Diplomacy, policy, strategy, and war are topics often debated by generals, politicians, pundits, and historians. Unfortunately, as he points out throughout this volume, what passes for strategy in the classic military sense has often been confused for policy by many Western powers.

Moreover, he points out that the frequently used (overused, in his opinion) Clausewitz’ quote that “War is the continuation of politics by other means,” is essentially lost in translation from German to English of the word Politik, which can mean either policy or politics, and that its interpretation by Western military thinkers has not taken into account the fundamental differences between the interaction of strategy and politics or strategy and policy during wartime.

The essays in the book cover a range of topics, from the continued utility of reading Clausewitz, to modern maritime strategy, to the often overblown influence of technology on strategy and warfare. In these essays, Sir Hew is critical of the military and political leadership in both the U.S. and Britain for what he views as committing the classic Clausewitizian error of not understanding the kinds of wars they were undertaking in Iraq and Afghanistan and compounding that error by not reacting to the insurgencies that were created in those countries after the overwhelming initial conventional victories in 2001 and 2003.

The thesis that a study of military history, including masters such as Clausewitz and Sir Julian Corbett would have better served the presidents and prime ministers directing their country’s militaries for the past decade is developed by examining how strategy has been formed and actually executed throughout history.

One of the reasons for the disappointing political results from nearly ten years of military action in Iraq and Afghanistan, Sir Hew argues, is that far too many generals, politicians, and pundits do not use history as the basis for creating, executing, and eventually evaluating the effectiveness of the strategies they implement.

In particular, nearly all of essays describe how too many modern military decision makers have focused on the changing conduct of war via smart weapons, high-tech sensors, and modern telecommunications or some other transient factor rather than the unchanging nature of war as a human endeavor with all the inputs from human energies and frailties and ultimately Clausewitz’ famous “fog of war.”

Sir Strachan offers a wealth of insight into the influence of history on strategy and provides an intriguing hypothesis that the most important influences on strategy in the early 21st century may not be the current “Global War on Terror,” a term he views with some disdain, but the lingering impact of World War II and the Cold War.

Finally, he posits that understanding what has not changed about the purpose, planning, conduct, and conclusion of warfare in the 21st century is at least as important as understanding those minor means of waging war that are in constant flux. The use of military history to understand the eternal nature of the human element of war and the influence of Thucydides’ “fear, honor, and interest,” will remain the best means of successfully developing and executing strategy, even in the constantly changing global environment of the 21st century.

This is probably the most important lesson of this timely and challenging book: Although the conduct of war has changed dramatically in the last century with the introduction of tanks, airplanes, nuclear weapons, smart bombs, and robotic drones, the fundamental purpose and humanity of war have not.