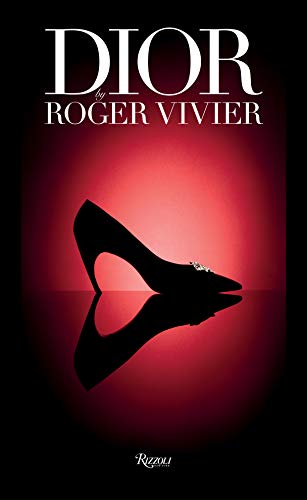 There seems to be endless ways to approach Christian Dior, the brand, the designer, and the maison. This time around, the focus is beneath the hemlines and more specifically the shoes that Roger Vivier created for Maison Dior during their decades-long collaboration. It can be said that what Roger Vivier did in conjunction with Maison Dior is unrivaled in its breadth, possibilities, and incomparable talent.

“The extraordinary ten-year collaboration between the house of Dior and Roger Vivier began in 1953 when Dior saw in Vivier a designer whose aesthetic evoked his own.”

Though comparatively speaking, the text is brief, the reader will learn the intricacies of just how this partnership began and continued through a web of businesses, countries, and personal connections. Semmelhack’s research is essential before you get to the thrust of the book, which is the pictorial chronicle of shoes that range from what one might consider basic day shoes to shoes that are nearly inconceivable—and yet they are all part of the oeuvre that is the Dior Vivier linkage.

As Dior wrote in his autobiography, “When women returned to high heels, they rediscovered a sort of dancing step, a gliding walk, which the fullness of the dresses accentuated.”

The educated shoe fanatic and fashionphile will know that examples of the most extravagant shoes ever produced are shown here. You become acutely aware of Vivier’s many contributions to the business of shoes. Another interesting point is that no matter the designer, Dior, St. Laurent, or Bohan, the shoes were conceived by Vivier in his workshops away from the Dior ateliers and then brought in to be used for each collection.

It could be said that in today’s world when ugly seems to pass for pretty that these shoes are unquestionably and exquisitely unique and deserve to be held as testaments to the manufacture and design of shoes as well as within in the business of fashion.

“Like Dior’s gowns, Vivier’s shoes embodied the romance and ornament.”

The prospective reader will only briefly read of other designers associated with Maison Dior, but they are merely postscripts when you see what Vivier created for Dior. This kind of workmanship, creativity, and imagination is nonexistent today regardless of the price or the brand.

If you are a shoe fanatic or truly crave knowing the genesis and history of the Vivier and Dior collaboration, to see and learn what few others will ever see, then this is your kind of book.