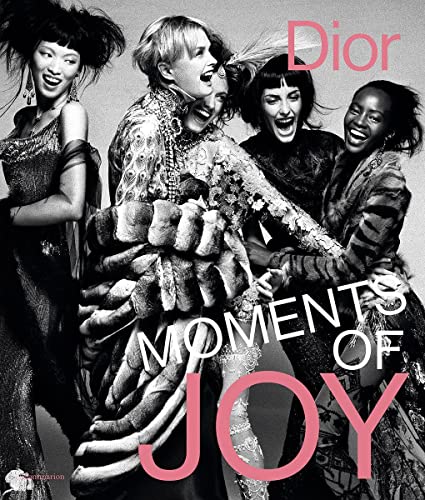 From the moment you begin to read Dior: Moments of Joy you become aware that this monograph is not like most within the genre. The reason is that the foreword is written by a psychoanalyst who tries to intertwine and justify the DNA of the brand and its eponymous designer with the concept and emotion of joy—which is not to be confused with happiness.

Physically and visually Dior: Moments of Joy is quite beautiful, offering an alternative way to see and think of Dior. Teodori tries to relate Dior to the ephemeral quality of joy, which is defined in many different ways within this 248-page volume.

There is also another facet of Dior: Moments of Joy. Probably more than 90% of the visuals are taken from the Maison Dior archive pre-2011, which was when Galliano was dismissed from Dior. Between Galliano and Christian Dior there were several designers who certainly made their mark with the brand, but they are not given their due by Ms. Teodori; perhaps she found them not as “joyful.” Another striking and noticeable detail, for the more astute fashion follower, is that the images that seem most out of place are those by Dior’s present designer; the contents seem to be designed for another brand.

The entire premise of Dior: Moments of Joy is based on the intellectual and psychological rather than fashion for fashion’s sake. The decision for reading Dior: Moments of Joy becomes extremely personal. Why do these clothes and the brand reflect a joyful response? Or can we just be awed by the images themselves and not get entangled in an intellectualized way of examining the designer and the brand? Or perhaps both are appropriate.