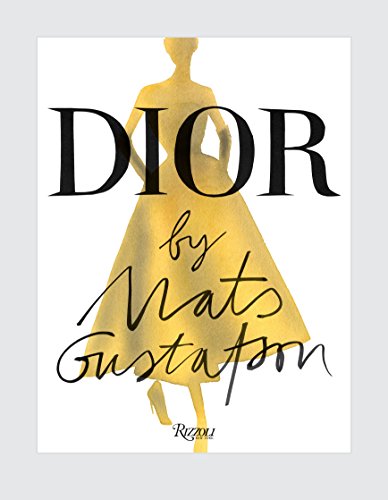 A new year brings still one more book focused on the heritage brand of Dior but the real question is whether or not the main attraction is the brand or the brilliant illustrator whose images inhabit the book. The prospective reader should also be aware that the book is not about Dior in its broadest sense but honed in on a specific time frame: Dior at the hand of Raf Simons.

The conundrum is clearly defined as to why would you buy this book; either because you are a Dior groupie, a Raf Simons devotee, a fan of fashion illustration, or hungry for the imagery of one of the great illustrators of the 20th century. This reviewer is always interested in almost anything written about maison Dior (least when Raf was at the helm), but has a great appreciation for the skillset and talent of fashion illustration and/or a fascination with Mats Gustafson. Unquestionably two of the three are satisfied but one aspect kept me wanting more.

The “more” aspect was how Gustafson would have seen Dior during the reigns of Dior himself, Yves Saint Laurent, Marc Bohan, and that fleeting moment of glory when Gianfranco Ferre was its designer. Amazingly the book does go beyond the times of Raf Simons and includes the first effort by its now creative director Maria Grazia Chiuri, which is sadly yawn inducing, as well as well as overwhelmingly disappointing.

Physically this is a fashion volume that stands on its own among the genre— especially when singularly viewed as a showcase for the exquisite and extraordinary artistry of Mats Gustafson. Its size befits the boldness of his illustrations as well as the statement that each makes.

If there is a slight detriment to the tome, it is the foreword that reads more like an overly embroidered fairy tale than a straightforward and factual accounting of this very talented artist’s career.