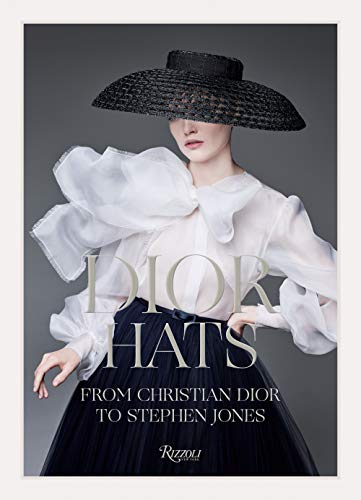 “Without hats there is no civilization.”
—Christian Dior

One more time this reader has been wrong in thinking that there isn’t anything more that can possibly be written about this fabled heritage brand and designer, but in this particular instance this reader could not have more thrilled with the content of Dior Hats: From Christian Dior to Stephen Jones!

Mr. Jones proves himself as talented and adept with the pen as he is with a hat block. This book is one of the most delightfully written monographs that singles out not only the one aspect of the brand but also the eponymous designer and all those who followed in his footsteps and became part of that orbit. One of the most commendable and respectful facets of the book is that Jones offers commentary about all of the designers who helmed the maison, giving the lion’s share, of course, to Monsieur Dior and John Galliano, yet including two others, Marc Bohan and Gianfranco Ferré, who are often omitted but left indelible marks during their respective tenures at Dior. One gets the feeling that the last two who hold and held the reins at Dior were and are far less adept at being of like mind with the eponymous designer.

The photographic images are absolutely sublime whether vintage or recreated for the book, which served as a catalog of an exhibition that just ended at the Christian Dior Museum in Granville. The integration of millinery with the brand stretches head and shoulders above so many books of this genre. Jones speaks in a most pleasurable and relaxed tone, supplying facts that have never before been written about in any of the vast inventory of books devoted to both brand and designer.

This reader sensed an almost intimate connection between Jones, the designers, and the brand in a way that is generally not exuded when one reads of Dior. Jones spent 24 years building what might be considered a love affair with the brand and what it stood for . . . again, that almost emotional connection is rarely exposed in books of this genre.

Here is a tiny morsel that will give you some insight into the closeness that developed within the Dior inner circle. When John Galliano was handed the honor of being the designer, Bernard Arnault told him “It doesn’t matter if the press gives you good or bad reviews, but you need to be on the front page.” That is something to be considered and remembered when you look at Dior in its present iteration as well as all the other LVMH brands.

There is so much to say about this unexpected treasure of a book, but rather than blather on and on about it, this reader would tell anyone who adores fashion that they must read this book and understand what made Dior and company the greats that they were and are in the world of fashion.